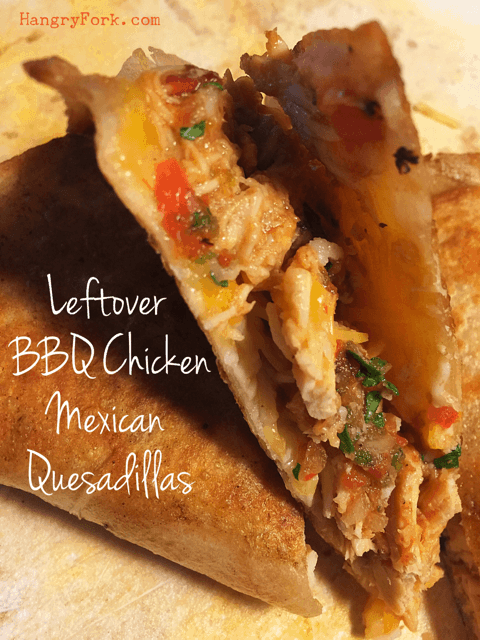 Leftover BBQ chicken Mexican quesadillas are so tasty!   My kids were eating these chicken quesadillas as fast as I could make them.

Last week my local grocery store had a special on whole chickens, they were only $0.79 a pound!  We basically ate chicken all week long.  😀

How to Make Oven BBQ’d Chicken

As you an imagine, I had a bunch of leftover oven BBQ’d chicken.

I had oringially planned on making BBQ chicken sandwiches, but I had a craving for chicken quesadillas and decided to turn the leftover BBQ’d chicken into Leftover BBQ Chicken Mexican Quesadillas!  It’s Tex-Mex inspired.

Shred the leftover chicken into a bowl.  Add some BBQ sauce and a few spoonfuls of chopped chipotles in adobo sauce for some extra kick and smokey flavor. 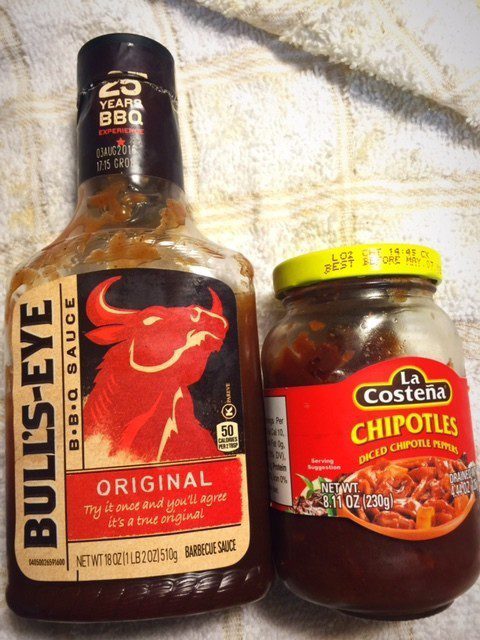 Stir the chicken, BBQ sauce, and chipotles to combine.

If you are making BBQ chicken sandwiches I recommend adding more BBQ sauce. 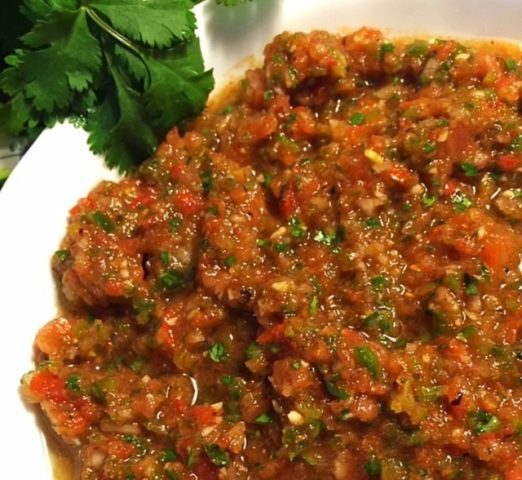 Make this easy homemade food processor salsa, which takes about five minutes tops and tastes amazing!  Or you could use store bought salsa! 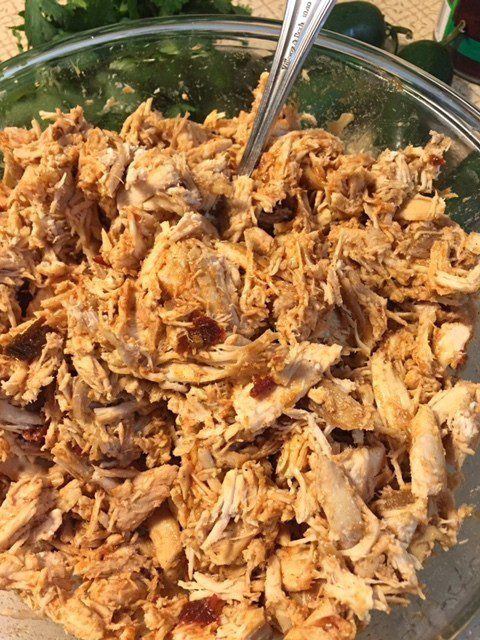 Melt a few tablespoons of butter.

Use a pastry brush to wipe non-stick skillet (set on medium) with melted butter.

On half a flour tortilla I put a little Mexican blend cheese, some of the leftover BBQ chicken, some homemade salsa, and more cheese.

Put lid on the skillet to trap the heat in and speed up the cooking process. 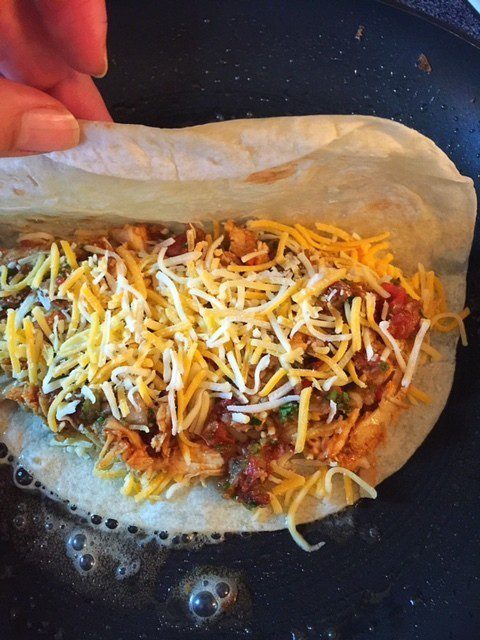 While the quesadilla cooks assemble another leftover bbq chicken Mexican quesadilla on your cutting board.

By the time you are finished assembling another quesadilla, it may be time to flip the one cooking.

Before flipping, use the pastry brush to brush butter on the outside of the tortilla to help with browning. 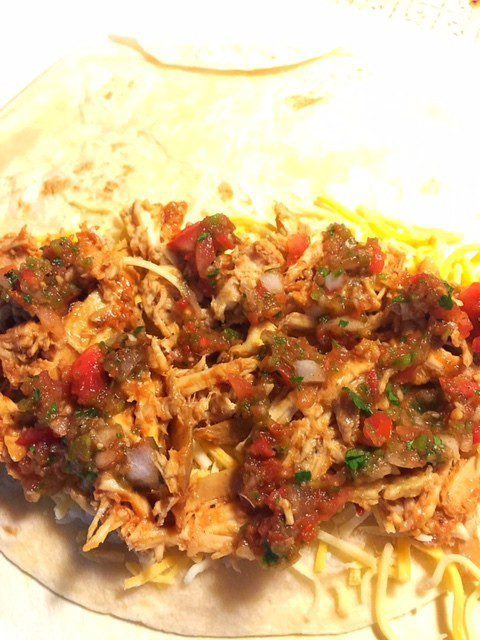 See how nice and golden the tortilla gets with a little butter? 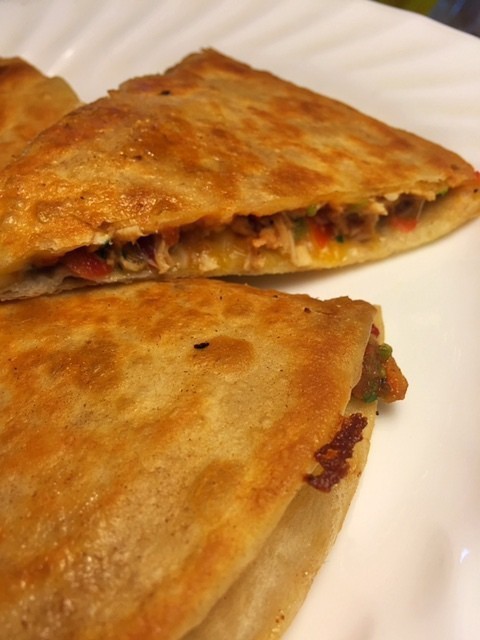 I ended up making 14 quesadillas, and I still have a little BBQ chicken leftover.

Halfway through cooking, I wiped out the non-stick pan with a paper towel to clean up cheese that had leaked out.

I plan on making these again tomorrow for a snack during the football game.

What to Serve With Leftover BBQ Chicken Mexican Quesadillas

I’m not going to attach a printable recipe to this quesadilla recipe because really this Leftover BBQ Chicken Mexican Quesadilla recipe depends on how much leftover chicken you are working with and how many quesadillas you are wanting to make.

I think the recipe would also work with leftover baked chicken, or even leftover fried chicken. 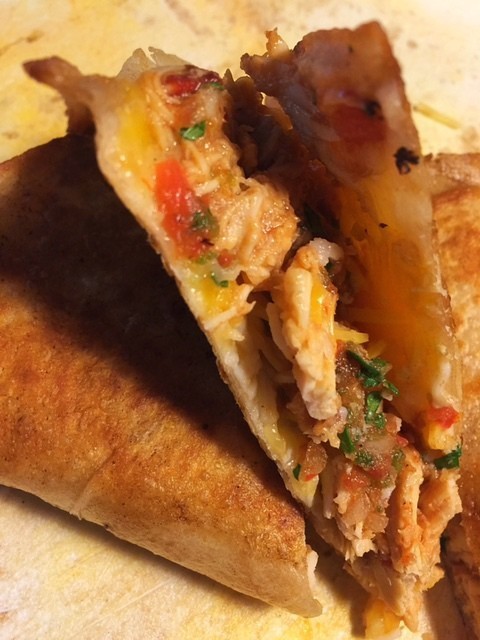 Check Out These Posts