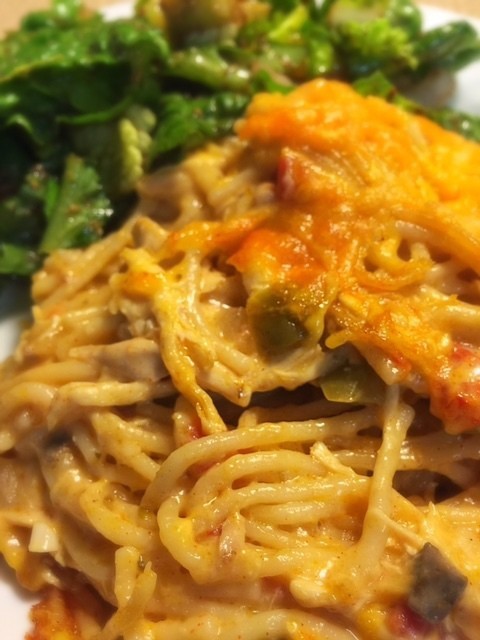 Cheesy chicken spaghetti casserole is delicious!  I love chicken pasta meals.  I can purchase whole chickens for everyday prices of $1.05 a pound, which is so much cheaper compared to boneless skinless chicken breasts.

With this recipe, I can stretch one whole chicken into two family dinners.

I boiled my chicken whole, if you are in a hurry, you could use a deli rotisserie chicken,  or cooked leftover chicken.

I subscribe to a bunch of cooking blogs, and love getting recipes delivered to my email every day.  I love waking up and discovering new recipes to inspire me.  The other morning I had this recipe in my inbox, and I thought to myself, “this sounds exactly like King Ranch Chicken Casserole but with pasta, minus the corn tortillas and rotel, why not make it with rotel?”  So that’s what I did and it turned out amazing!

Note:  All the photos in this recipe are for a double batch of cheesy chicken spaghetti casserole.  The recipe I’m putting up is for a single batch which is enough to serve the average family, trust me, this recipe makes a bunch!

First I boiled a whole chicken until it was falling apart.  This took about one hour.  Then I transferred the chicken into a big bowl.  I used a pair of tongs to loosen the meat from the bone to speed up the cooling down time needed to shred the chicken by hand.

I then added a little more water to the pot the chicken was cooked in and put the pot on high to get the water boiling for the spaghetti noodles. 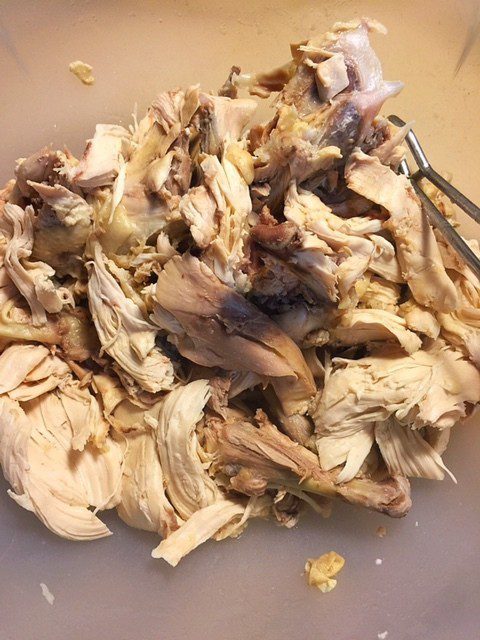 While the chicken was cooling down, I chopped up some onion and green bell pepper and sauteed them in a non-stick dutch oven with some butter. 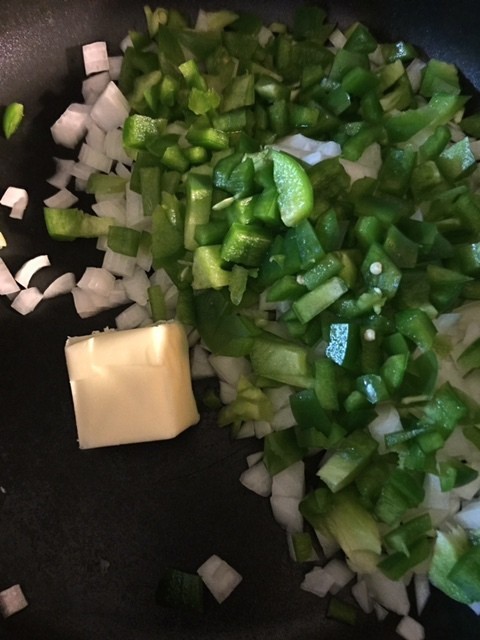 When the onion and bell pepper softened, I added garlic and some spices (chili powder, oregano, and cumin)  and cooked until fragrant, about a minute or two. 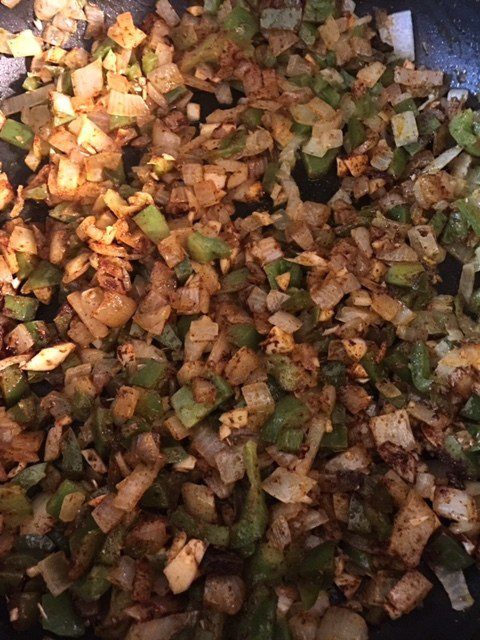 Next, I added in the Rotel, cream of chicken and cream of mushroom soups, and 3/4 cup water.  I shredded the cooled-down chicken and added that in too, along with a cup or so of shredded cheddar cheese.

Hopefully, your water is now boiling for the pasta.  Add a little salt to the pasta water and cook the spaghetti according to the package directions.  Keep simmering the soup/chicken mixture to warm it all up and melt in the cheese, this should cut down on cooking time in the oven.  This is what the chicken mix looked like at this point. 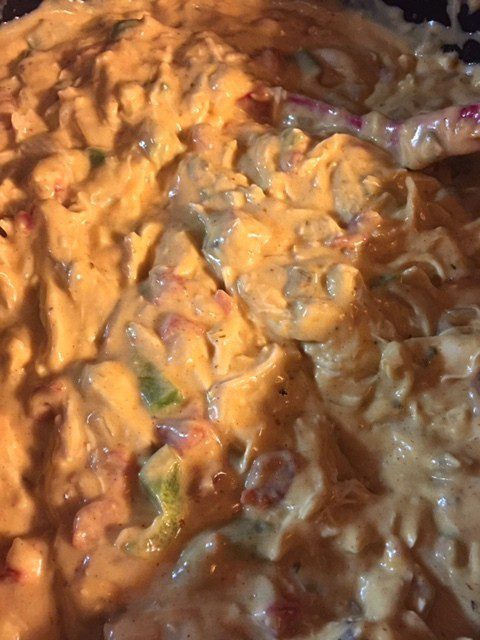 When the pasta is done, drain it.  Add the pasta to the soup/chicken mixture and stir it in to combine.  Transfer the chicken spaghetti to a casserole dish sprayed with non-stick spray. 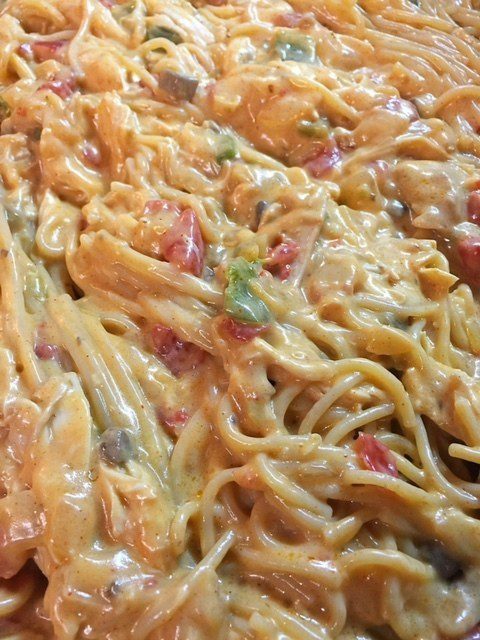 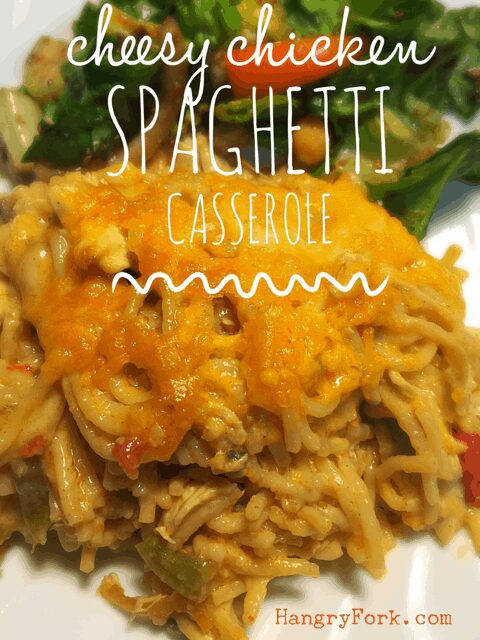 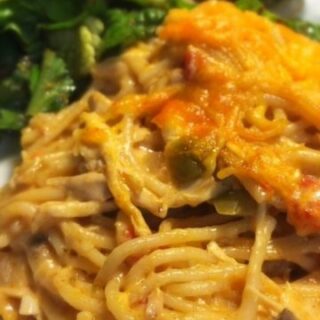 ugh this meal wold be great without the meat

I received your email eastin and then I opened your post it's interesting work I like it very much. You are making a great work thanks.

This looks SO GOOD! Since we're practically vegetarian, I might try this without the chicken, or with Meatless Griller Strips mock chicken. Yum!

I'm sure it would be great without any meat. I don't eat much meat myself, but my husband can't get enough meat.