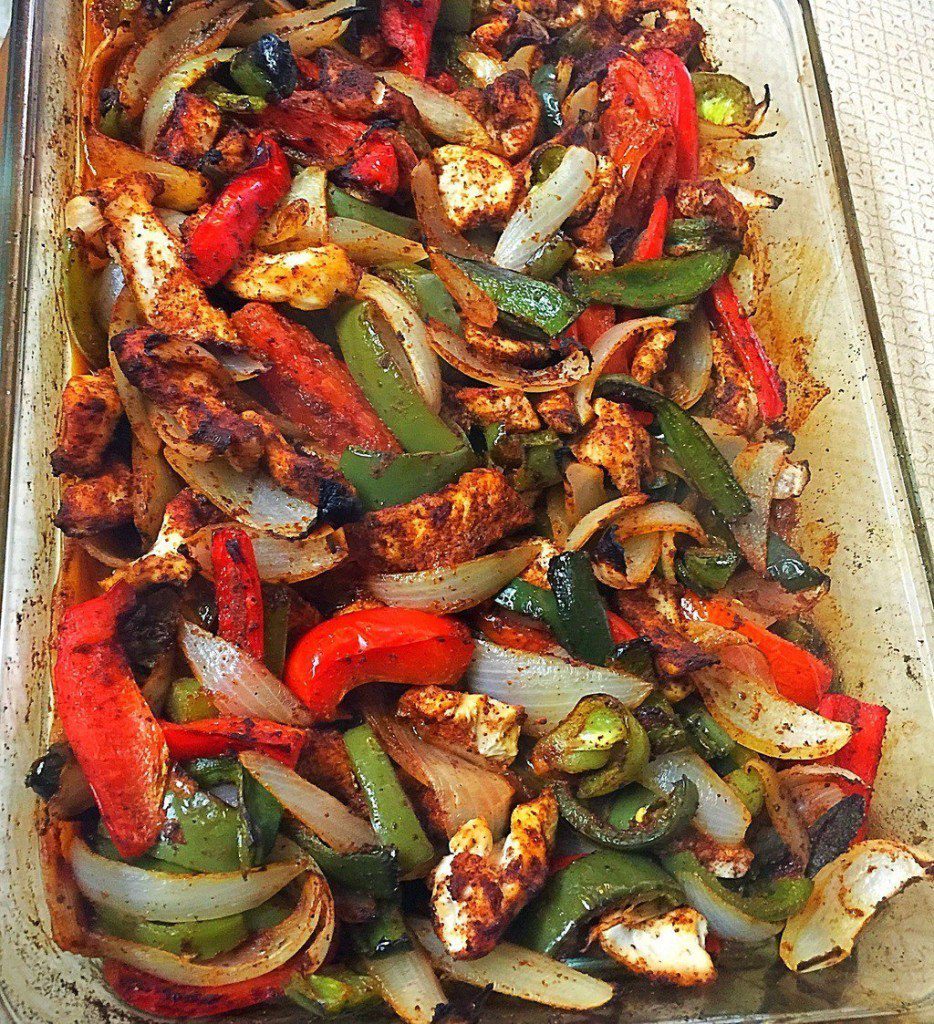 Here’s an easy oven-baked chicken fajitas recipe. This recipe makes a lot of food and if you double the recipe, it makes perfect fajitas for a small crowd. I combine my own taco seasoning recipe with sliced bell peppers, jalapenos chilies,  onions, tomatoes, and sliced chicken breast, toss in a little olive oil, and bake at 425 degrees for 30 minutes or so.  These oven fajitas are an amazing one-dish meal.  The recipe does take some prep though, but it goes by quickly.

If you are feeding a small family, you may want to consider reducing the recipe by half.  I’ve never tried making this with beef, but I’m sure it would work out just fine.

Here’s another great recipe for Steak Fajitas cooked on the Blackstone grill. 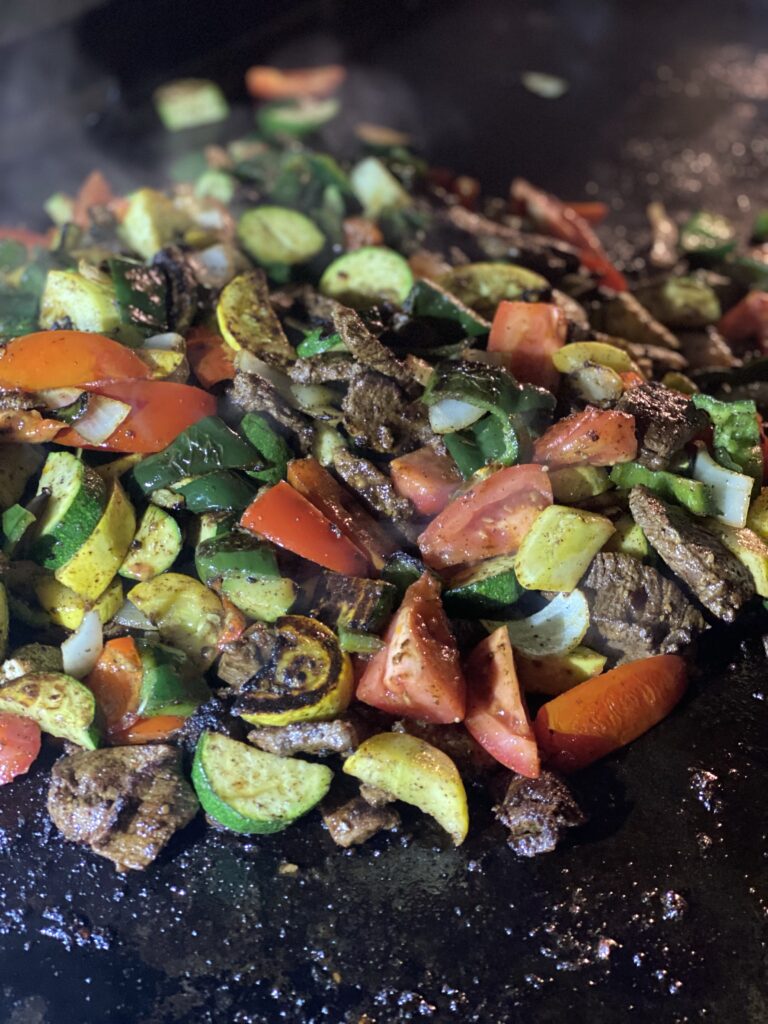 How to Make Baked Chicken Fajitas 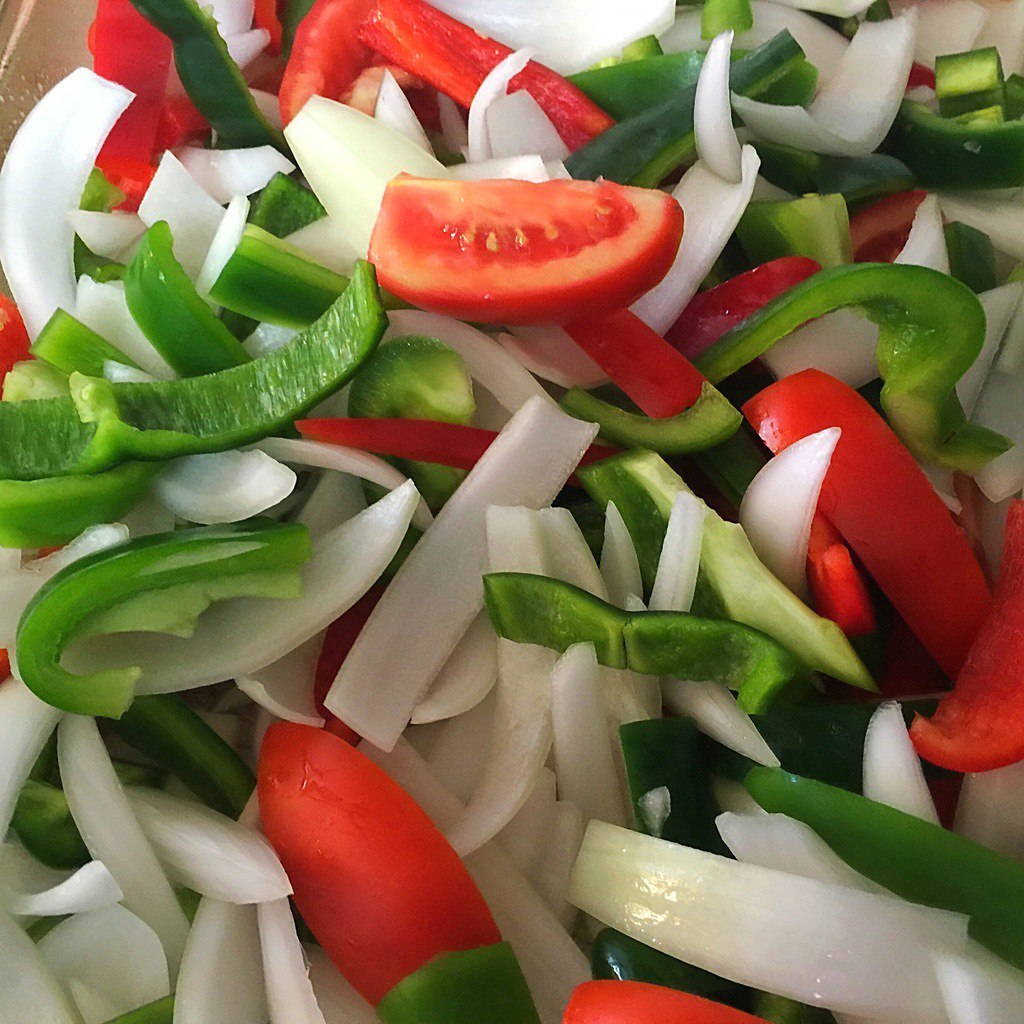 This recipe calls for the following vegetables:

If you have garden tomatoes, use them.  If you don’t have poblano peppers, don’t worry about it, use another bell pepper instead.  The recipe is very forgiving as long as you keep the volume of the vegetables about the same, if you use fewer vegetables, then you should also use less of the chicken fajitas seasoning. 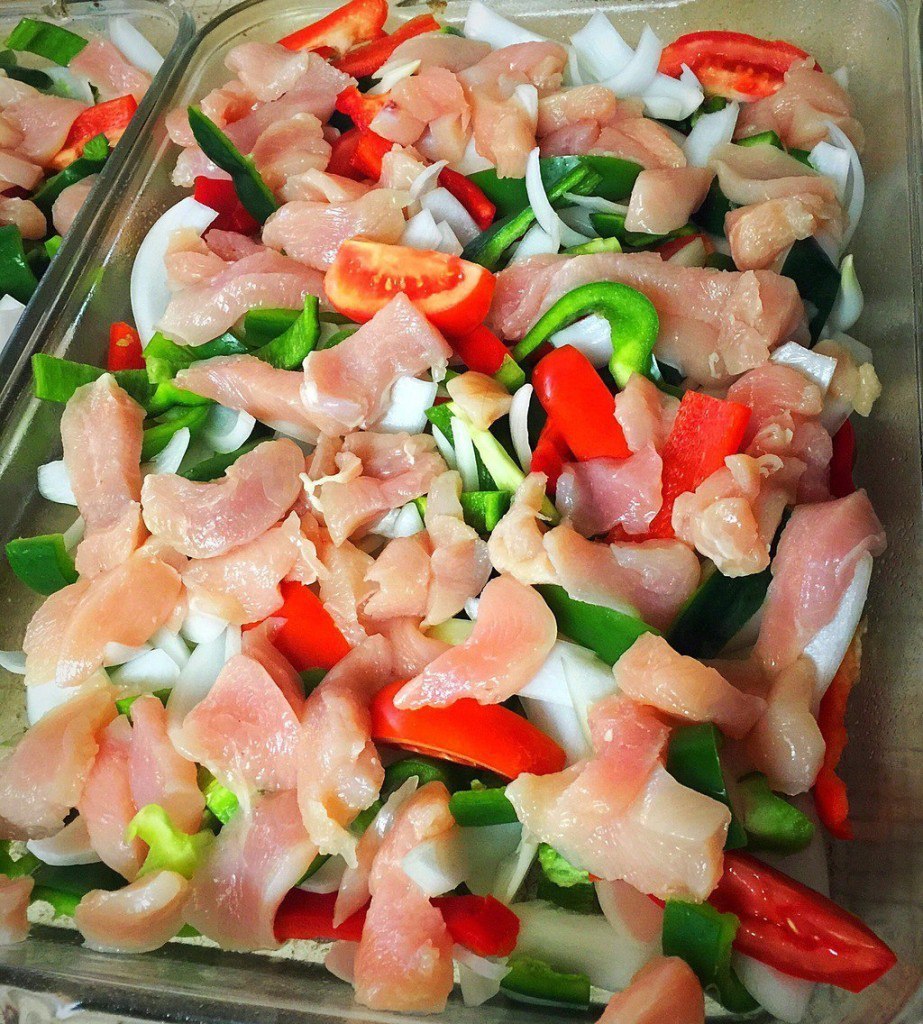 Slice the chicken breast into thin bite-sized pieces and place them on top of the vegetables.  Next, you will assemble the spice mix in a small bowl.  The chipotle powder gives the fajitas a nice smoky flavor.
Disclosure:  This post contains Amazon affiliate links. 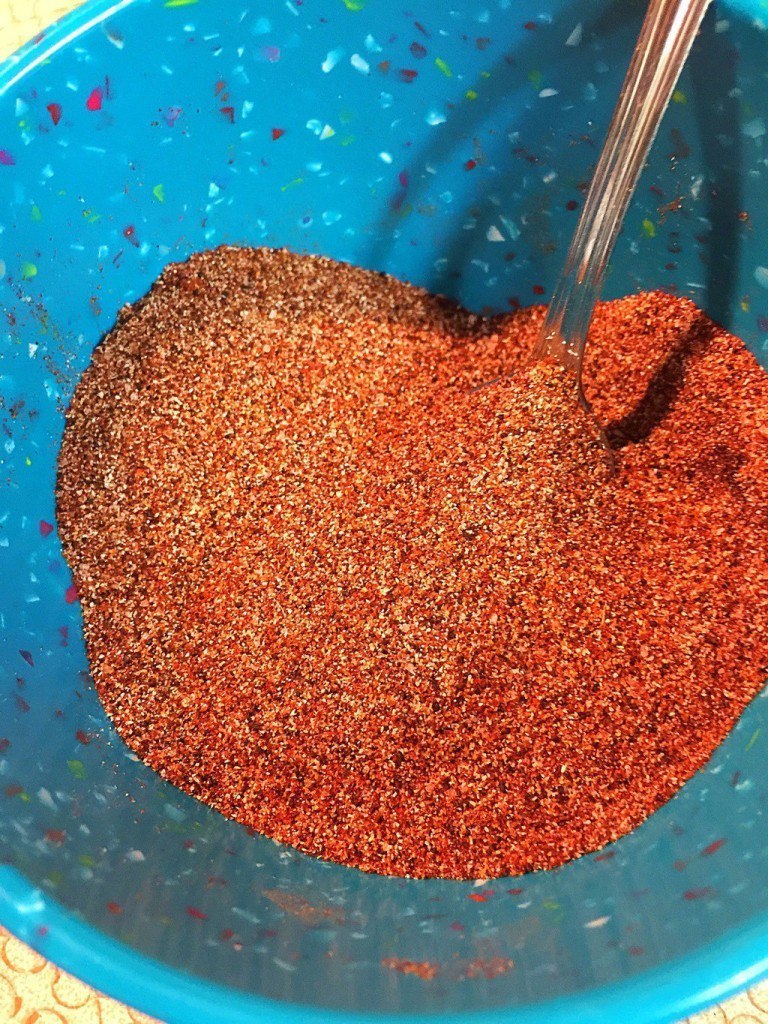 Now it’s time to sprinkle the spice mix over the chicken and vegetable mix. 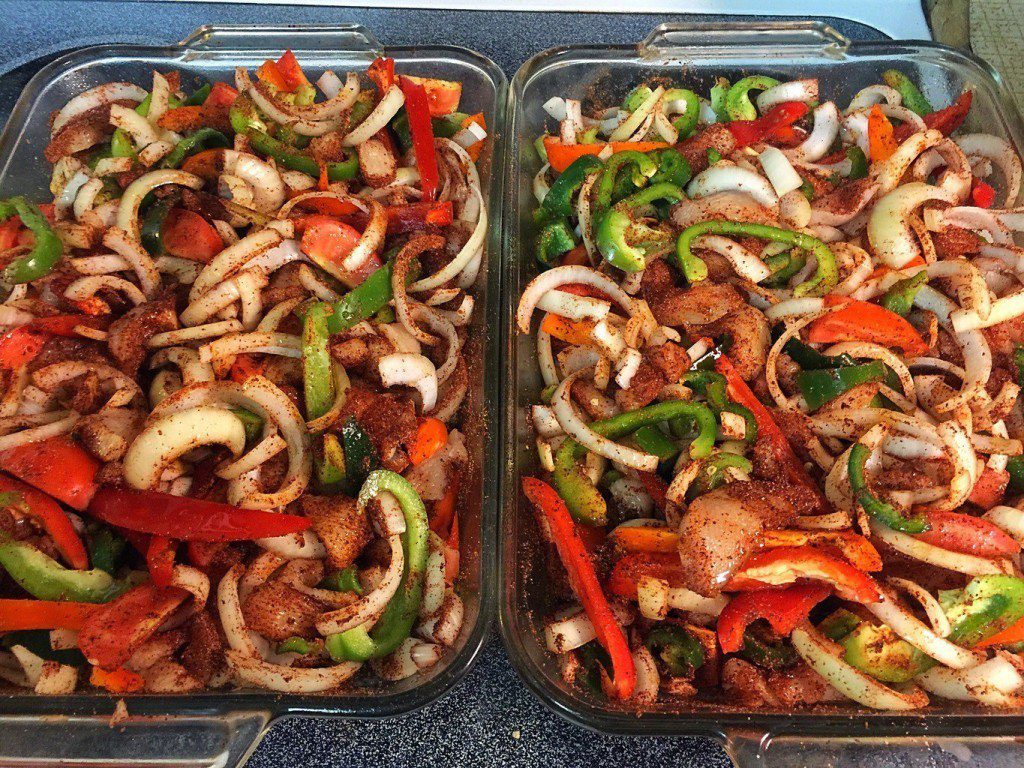 Use tongs to mix the spice into the vegetables and chicken.

Drizzle with olive oil and bake according to directions.  You will toss the fajitas halfway through the cooking time.

Served with warmed-up tortillas.  I prefer flour tortillas, but some people really like corn.  You could also serve this with guacamole, salsa, tomatillo avocado salsa, sour cream, taco cheese, and or slices of lime.  These fajitas are also great served with authentic refried beans or spicy refried black beans. 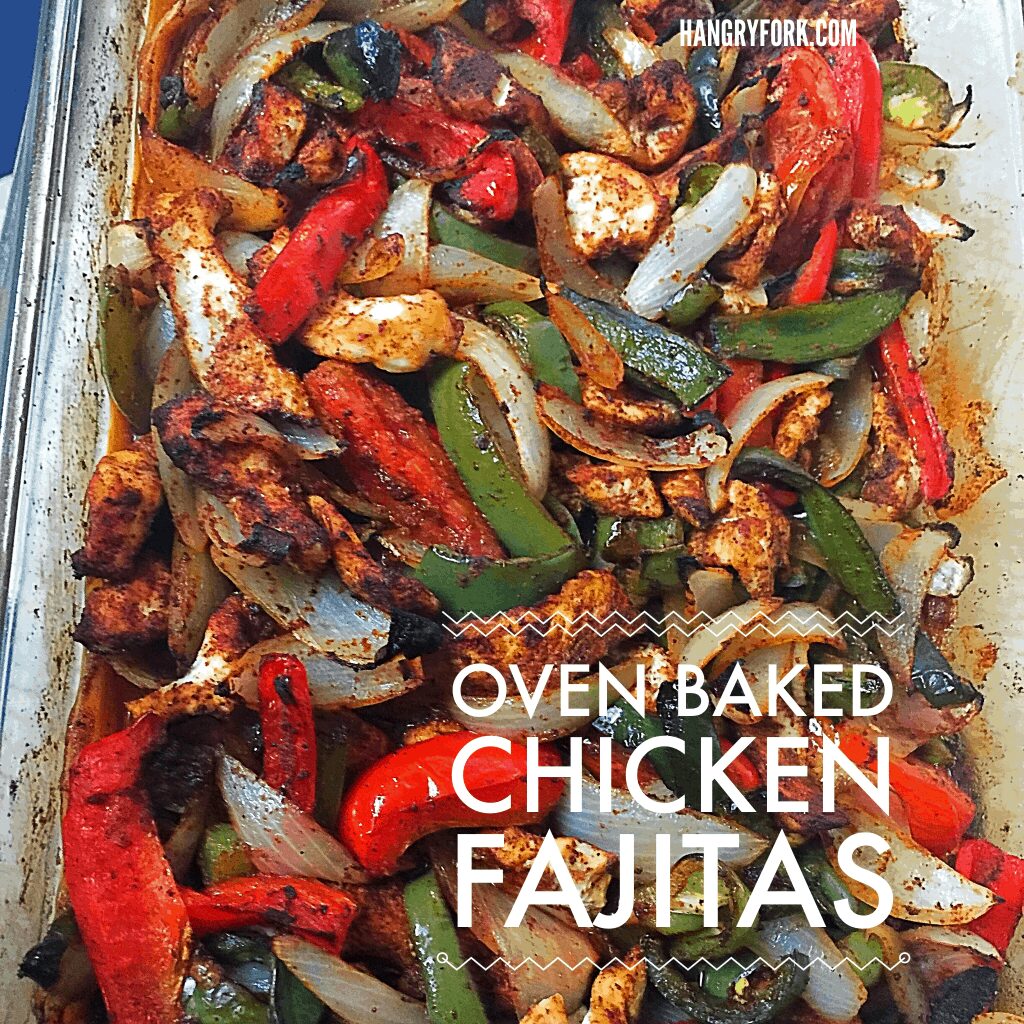 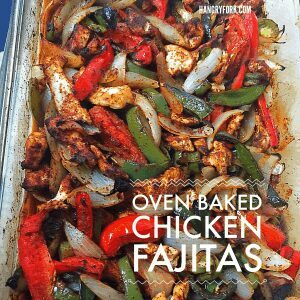 Shelly
This is an easy to make baked chicken fajitas recipe. This recipe is better most fajitas I've had in Mexican restaurants. The recipe makes a lot of food! If you are feeding a small family, you may want to half it. If you half the recipe, remember to half the spices too! For a less spicy version, leave out the jalapeno peppers, and cayenne powder.
Print Recipe Pin Recipe
Prep Time 15 mins
Cook Time 30 mins
Total Time 45 mins
Course One Pot Meals
Cuisine Mexican
Servings 10 + servings

564 Shares
Pin211
Share59
Tweet3
Reddit
Yum291
Pocket
Email
Print
Click here to cancel reply.
I hope you love the products I recommend! When you buy through links on HangryFork.com, I may earn a small commission at no additional cost to you. Learn more