In June 2014, we took a little family trip to Bodie California and visited one of the most incredible California parks, Bodie State Historic Park.  Bodie, CA is an authentic wild west ghost town.  The park is officially in the “state of arrested decay.”

Bodie is located in Mono County, California, near the California and Nevada state line near Hwy 270.  Bodie is in the middle of nowhere.  Even though we live in California, we came in from the Nevada side when we visited. 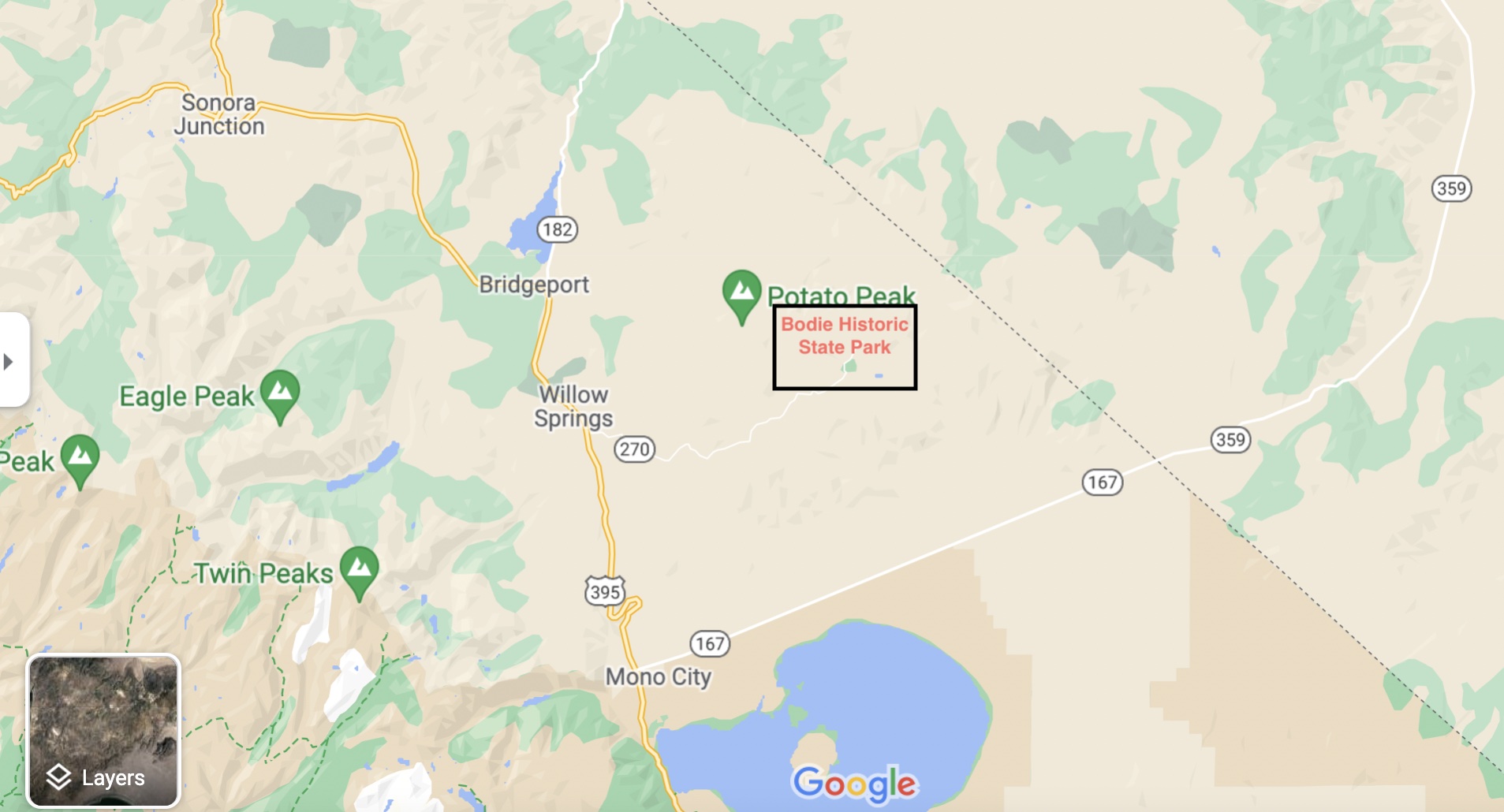 Why Was Bodie Ghost Town Abandoned?

Bodie was a boomtown.  Gold was discovered, which drew people to the area, hoping to get rich quickly.  When mining profits dropped, the miners moved onto the next place they thought they could get rich working.

The last working mine was shut down in 1942 as part of World War II.  The War Production Board ordered all non-essential gold mines to be closed.  When the war was over, mining did not resume.

One of the things I love about visiting Bodie California is visitors are free to walk around the town and peek into all the buildings.  We spent four or five hours walking around this ghost town.  All of the interior pictures were taken through windows.

Here’s a Bodie house.  What’s so cool about this ghost town is most of the homes all still have furniture in them.  It’s like the owners woke up one day and just left. 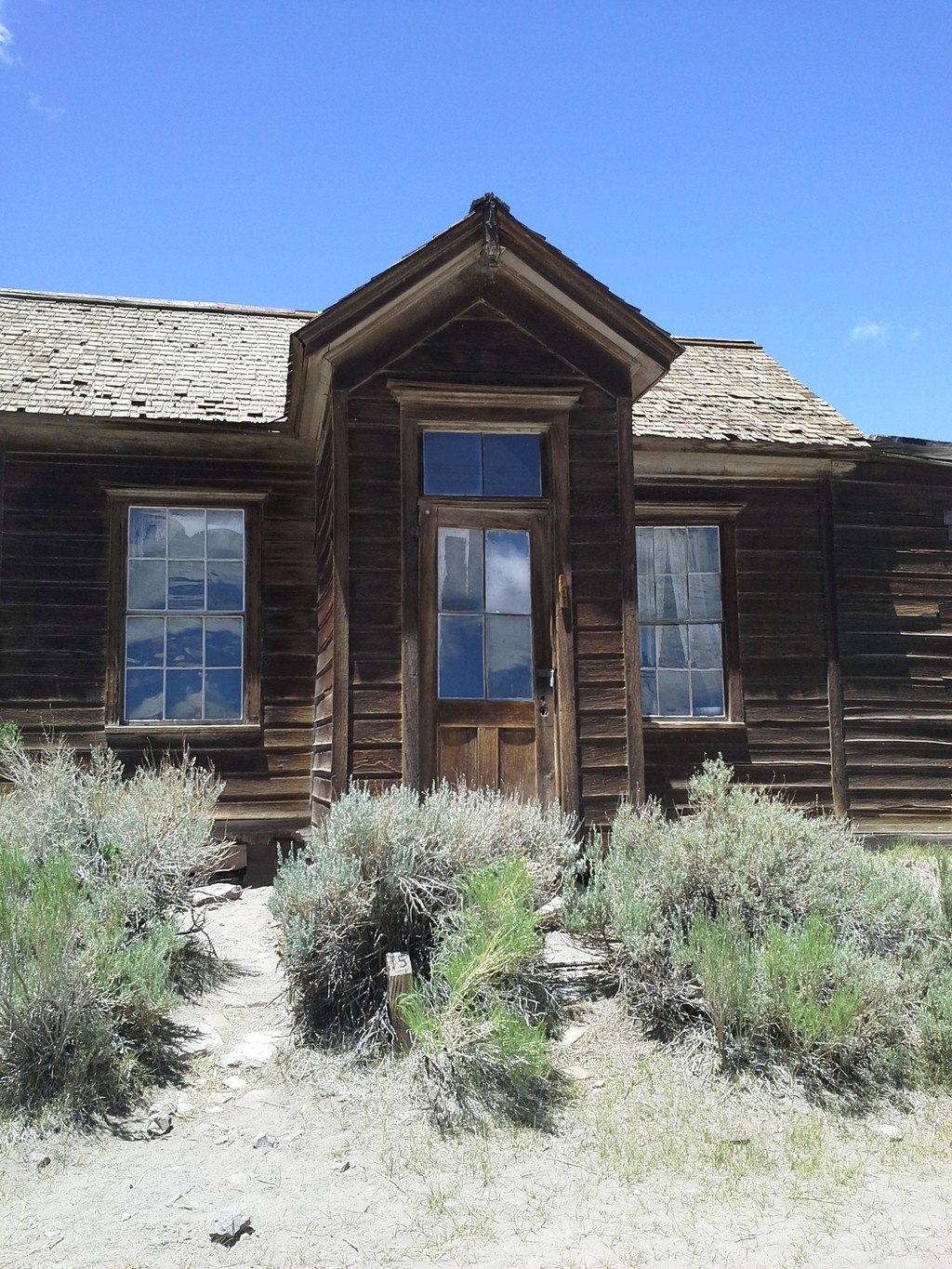 I love this house below!  As you can see, the owners kept adding on and adding on.  If my memory serves me correctly, this house was one of the only ones with an outhouse attached to it in the back of the house.

The red-headed girl walking towards the back of the house is my daughter #3.  😀 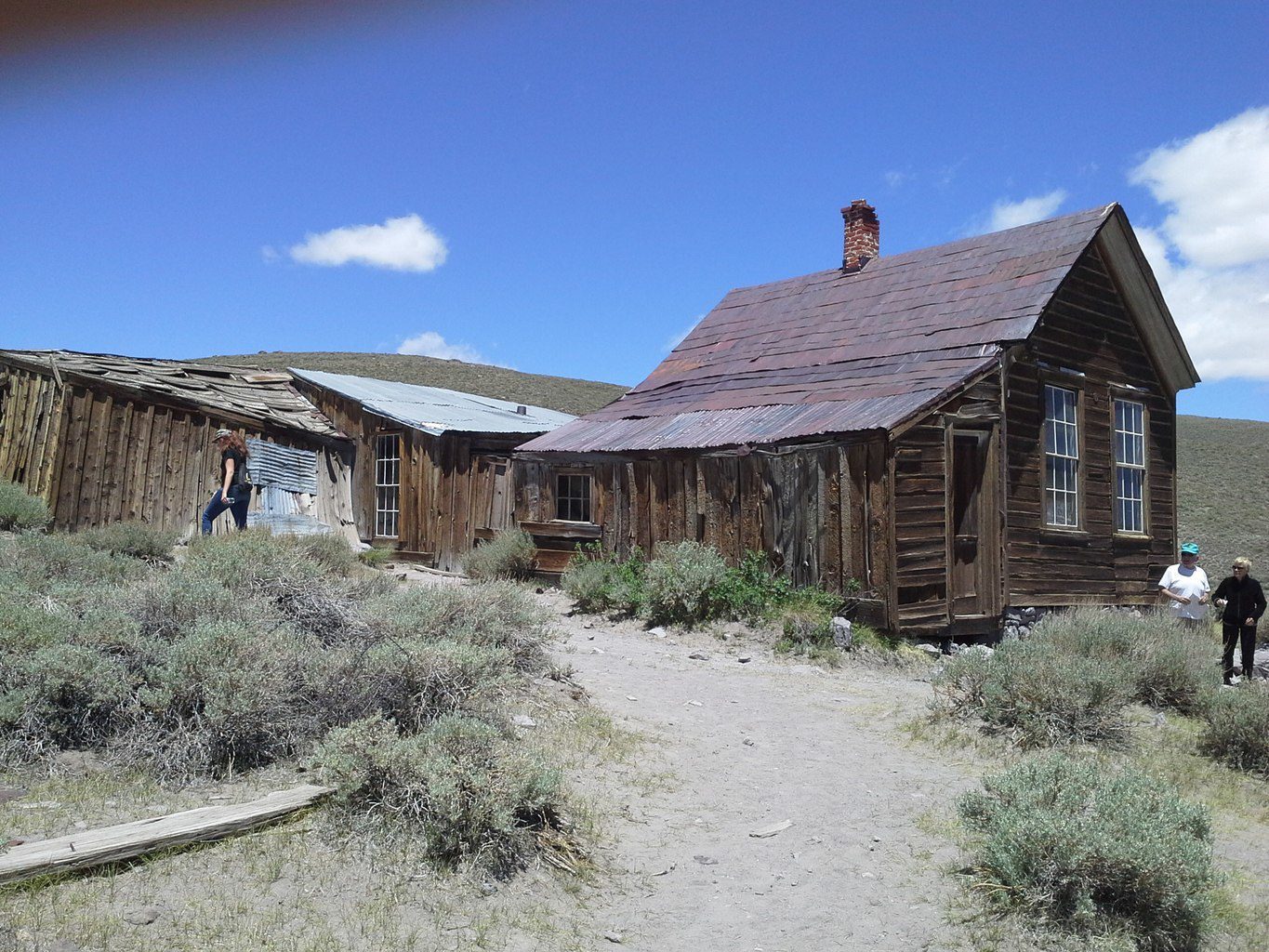 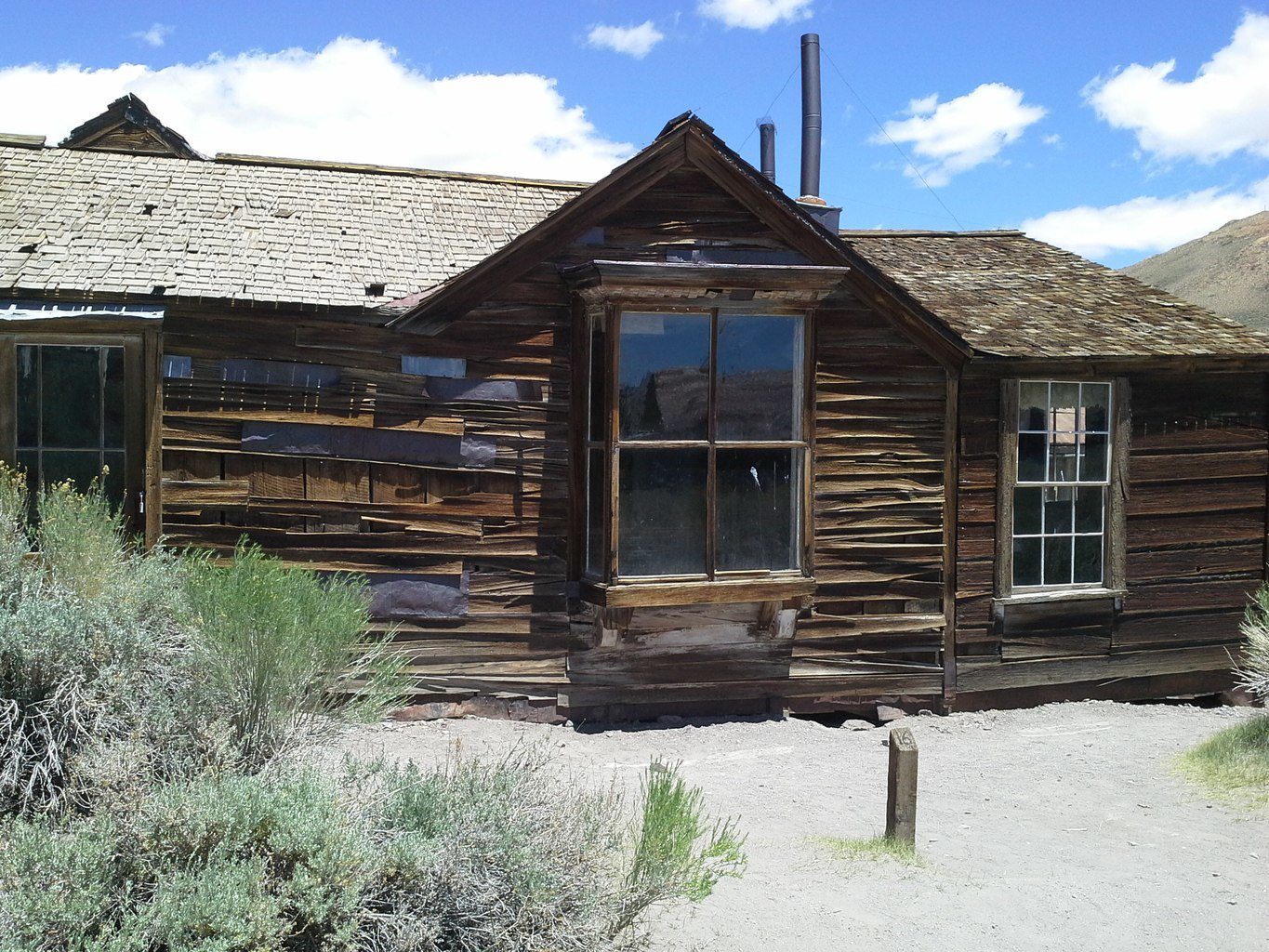 Interior view of one of the Bodie, CA houses. 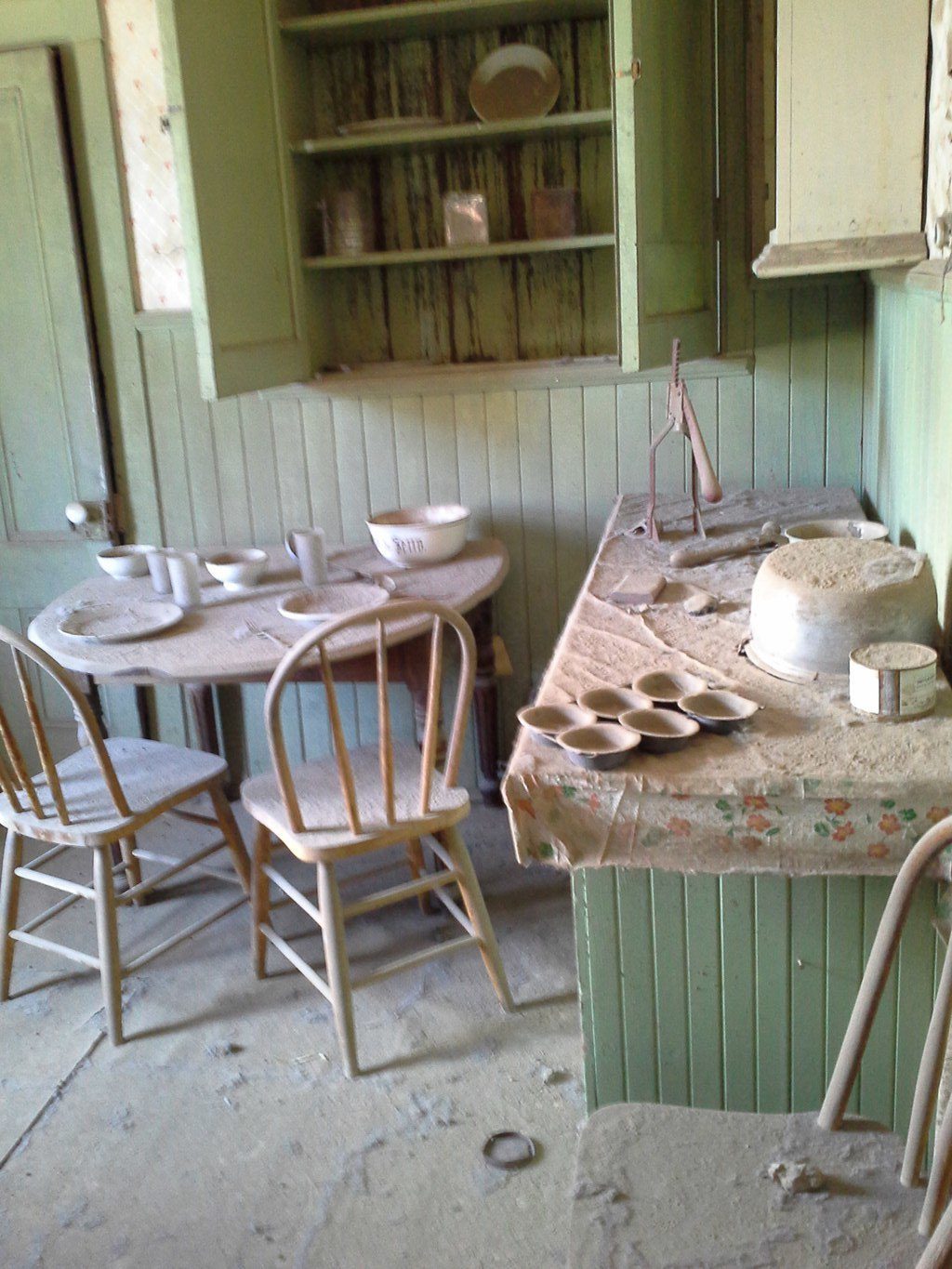 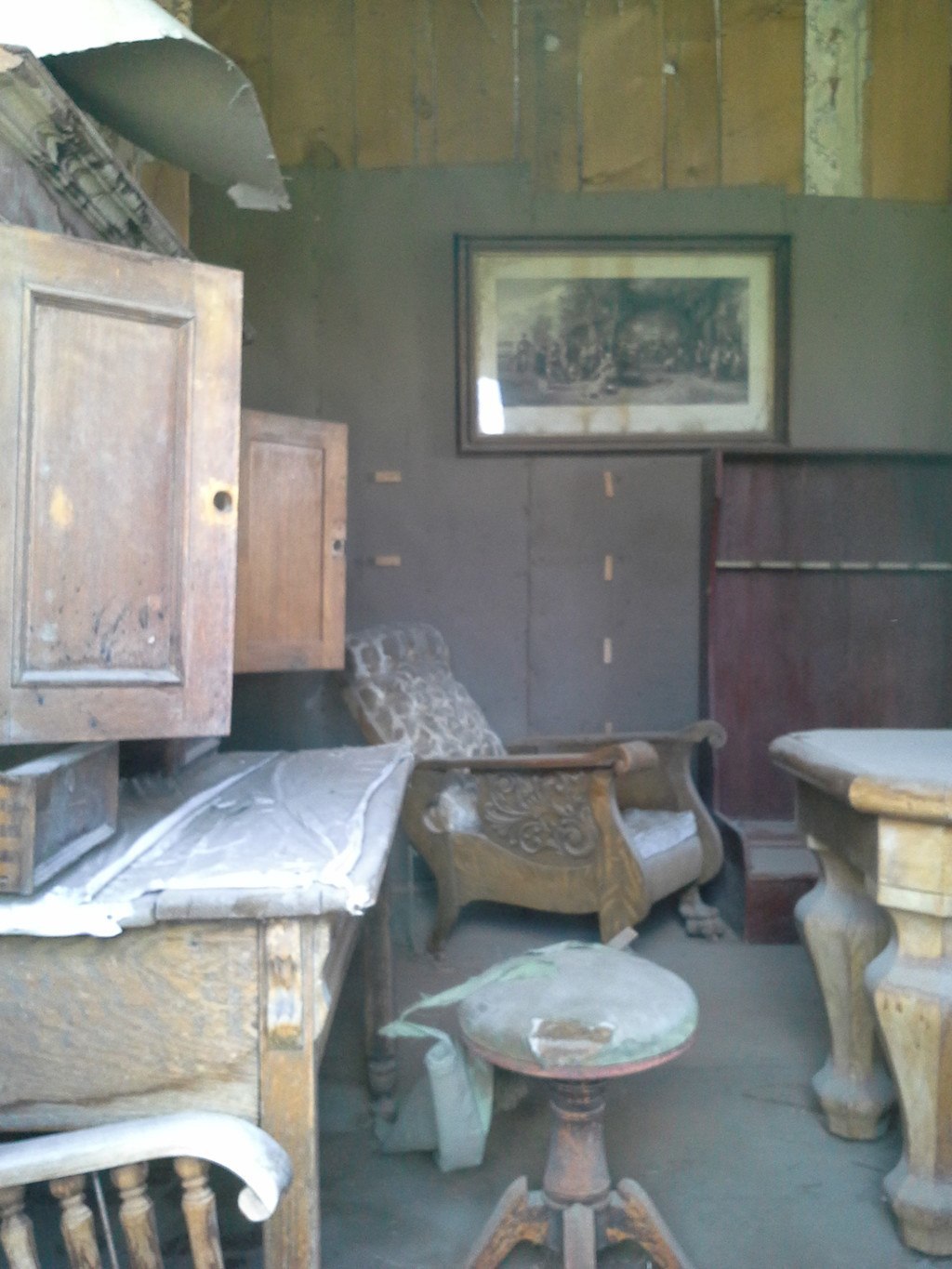 In the interior photo below, there are still jackets hanging on hooks. 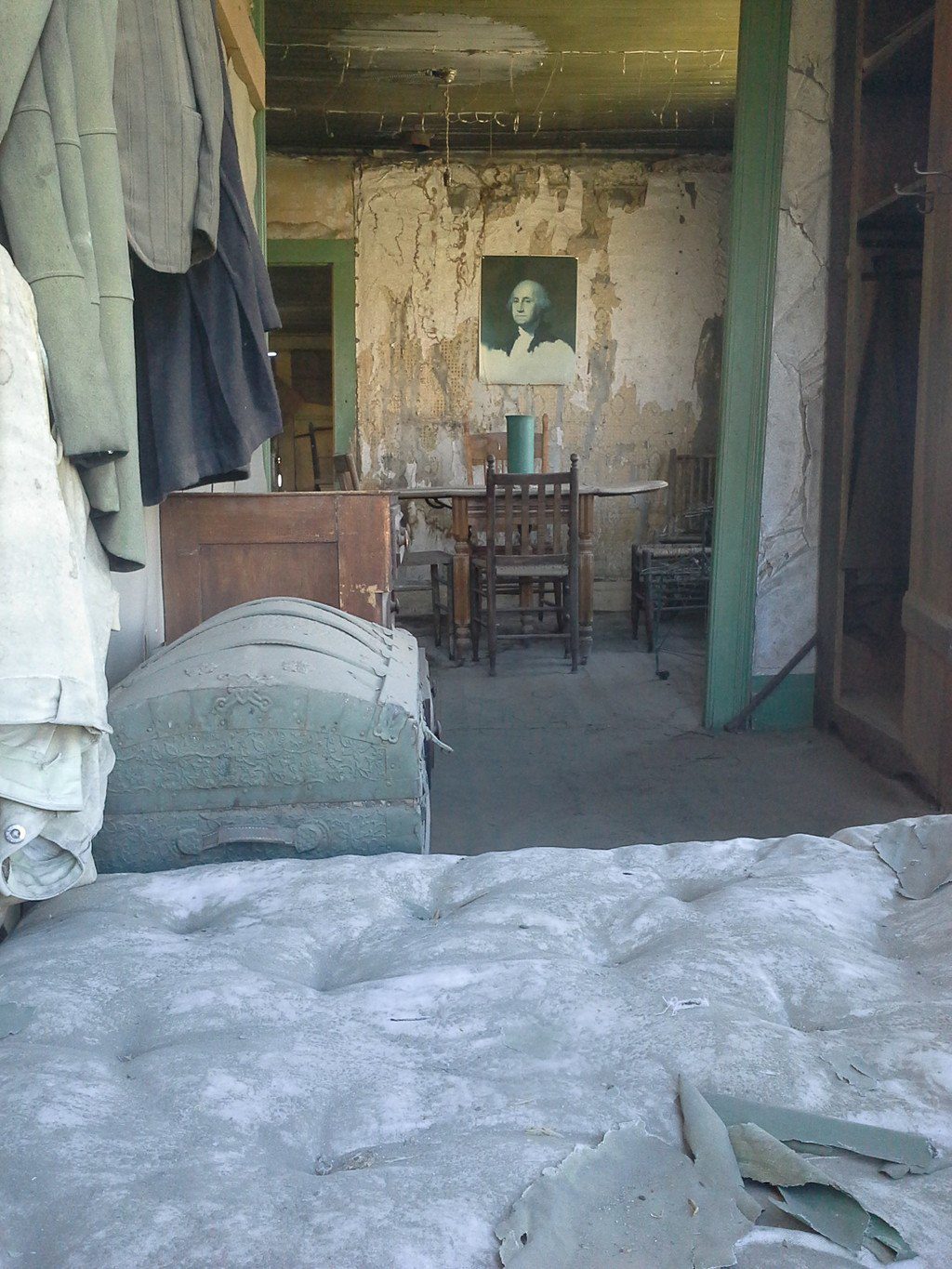 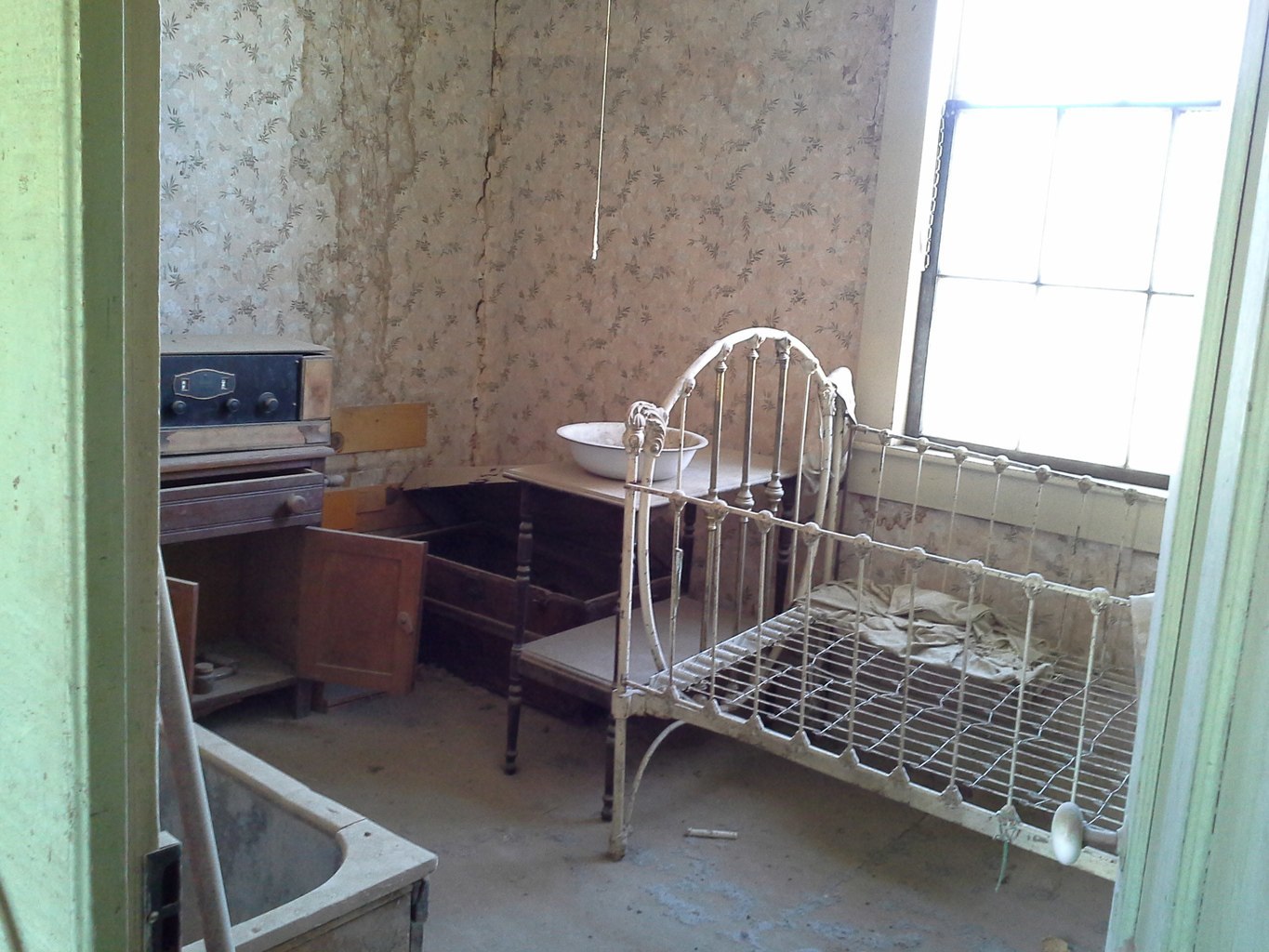 Here’s a small bedroom.  It looks like they had used some cloth as wallpaper. 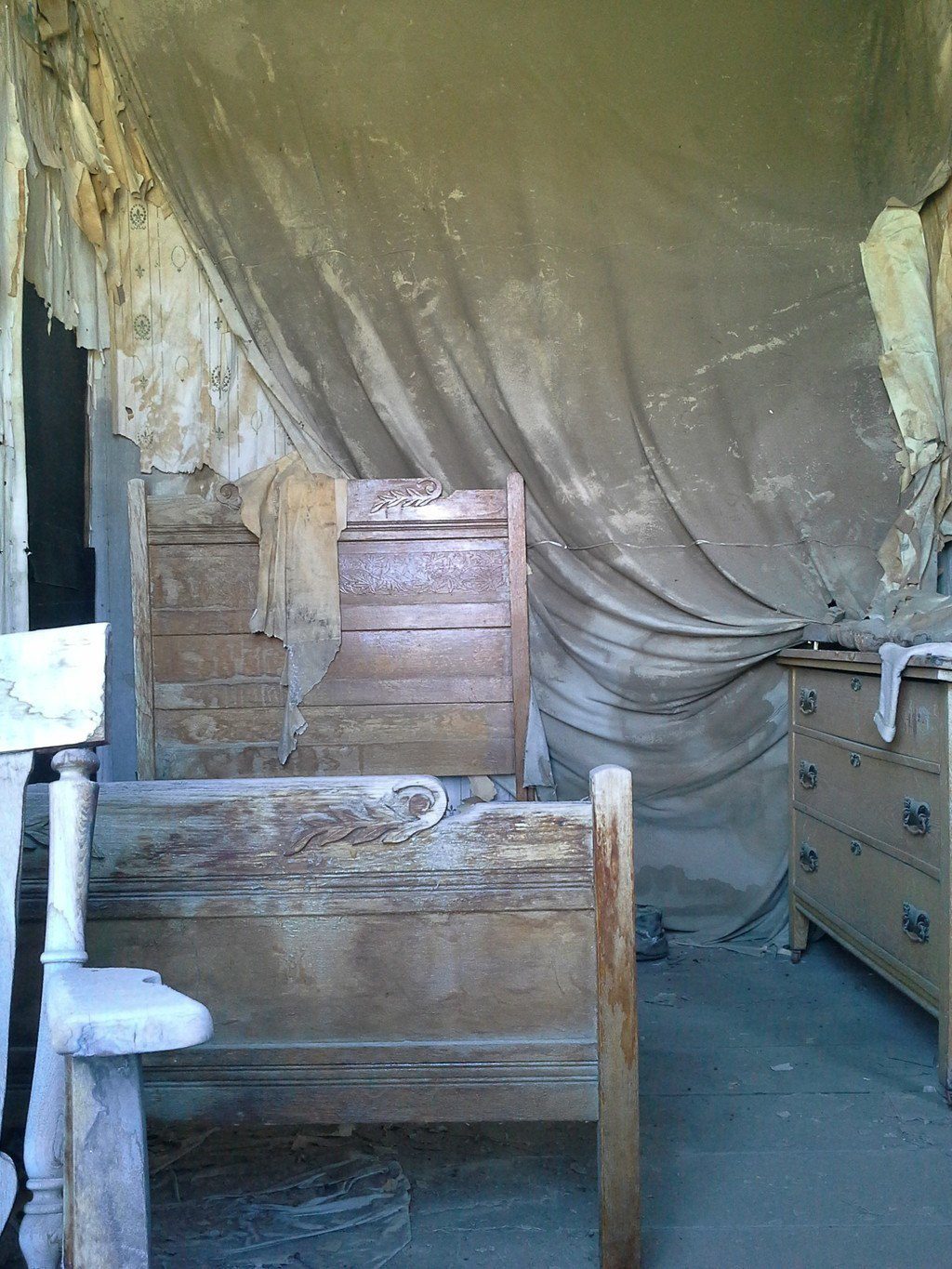 I believe these scales were used to weigh gold. 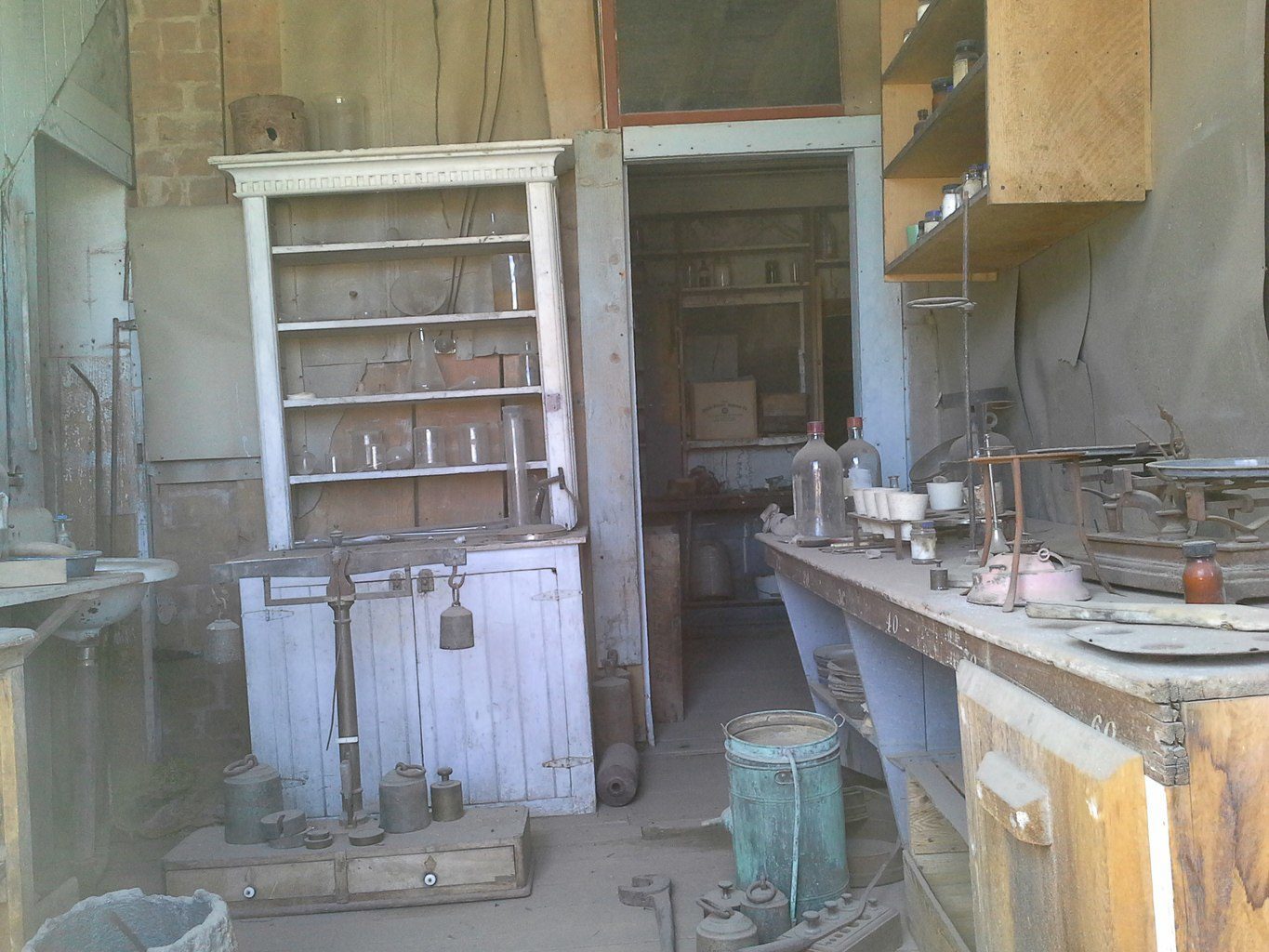 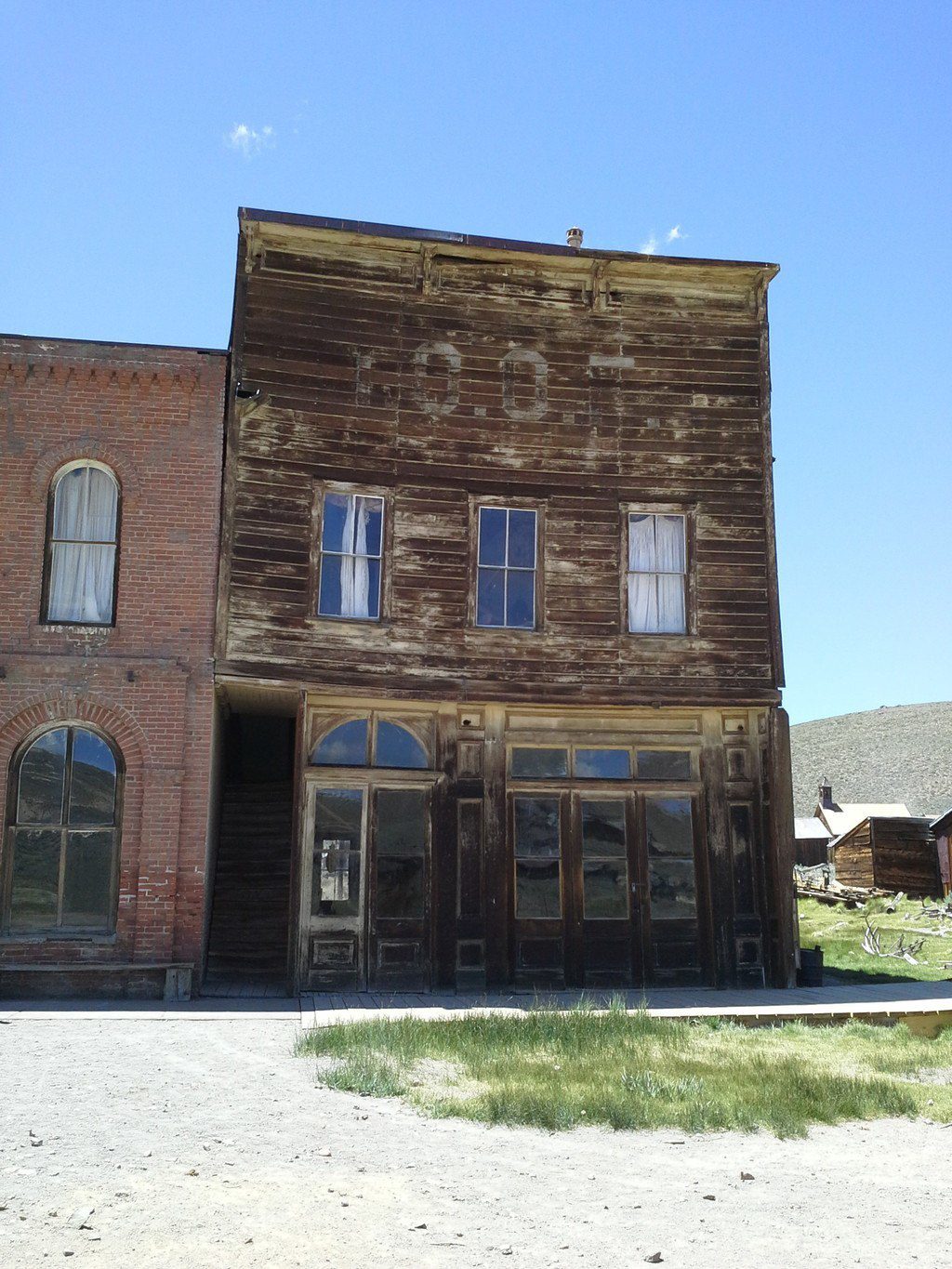 Below is the old Bodie schoolhouse.  The two looking inside are my daughter #2, and my son. 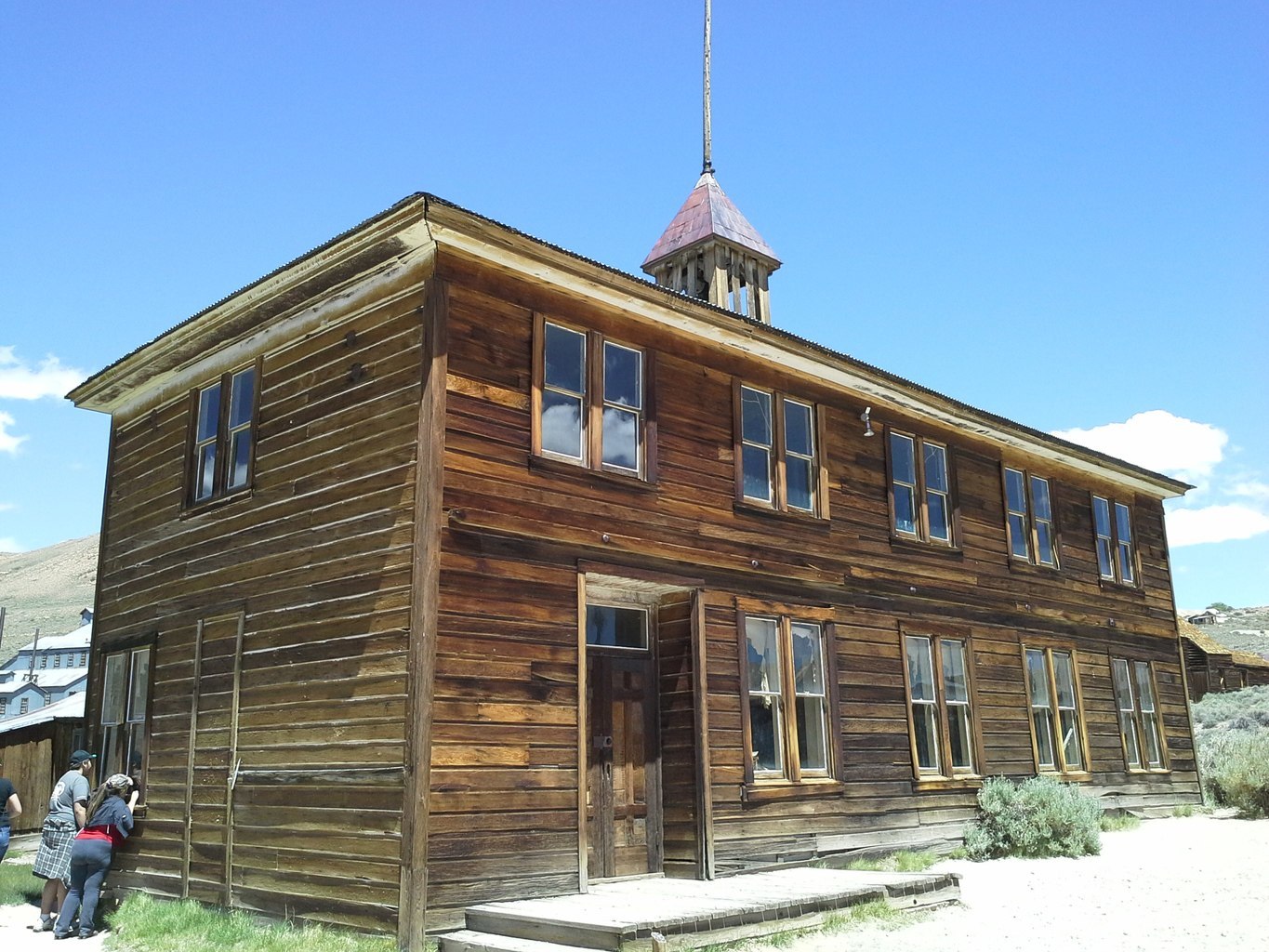 I took this picture below of the schoolhouse globe.  It was sitting near the window. 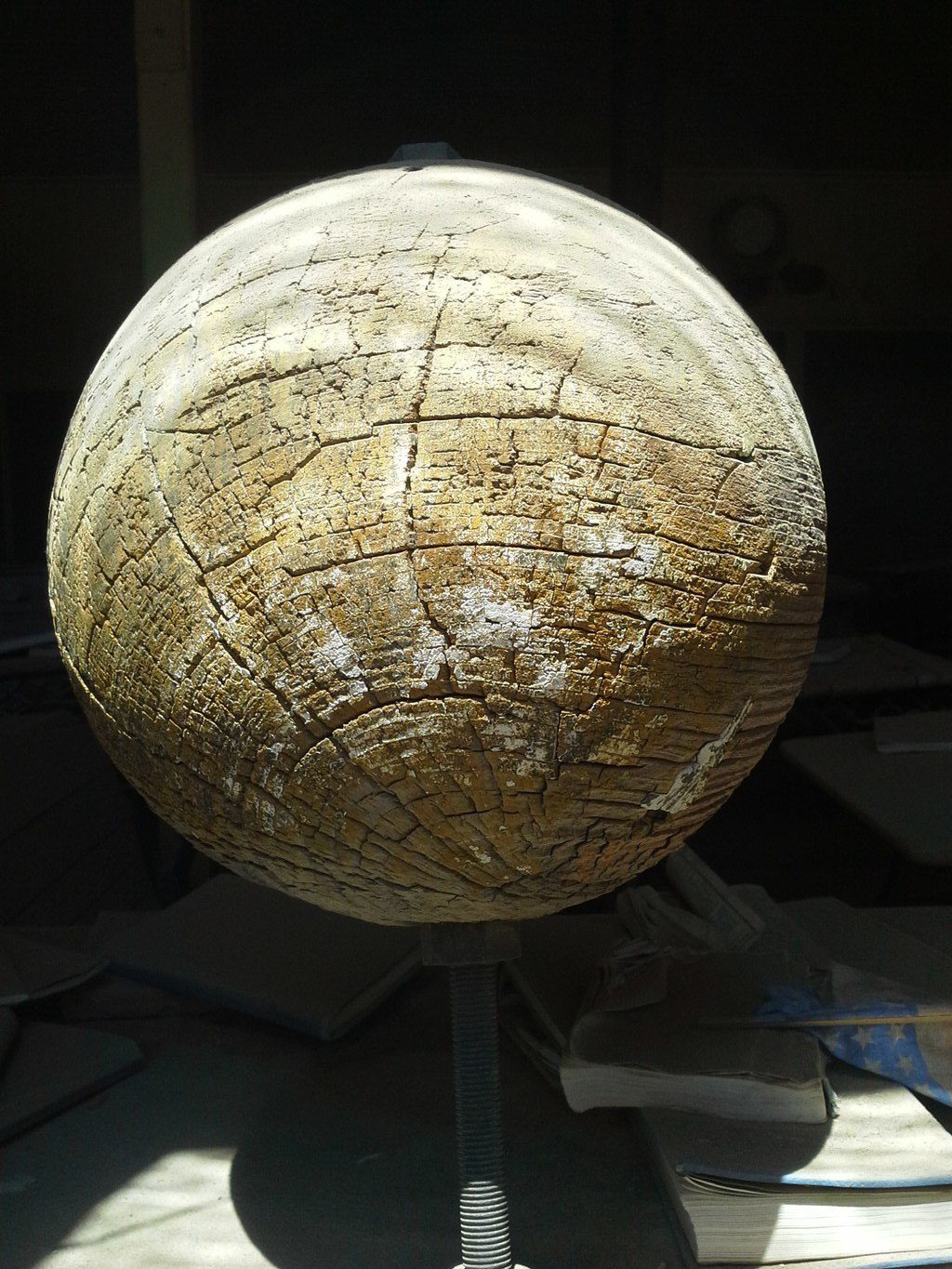 Interior photo of the schoolhouse.  Notice the writing on the chalkboard and the student desks with books.  A wood stove is in the center of the classroom. 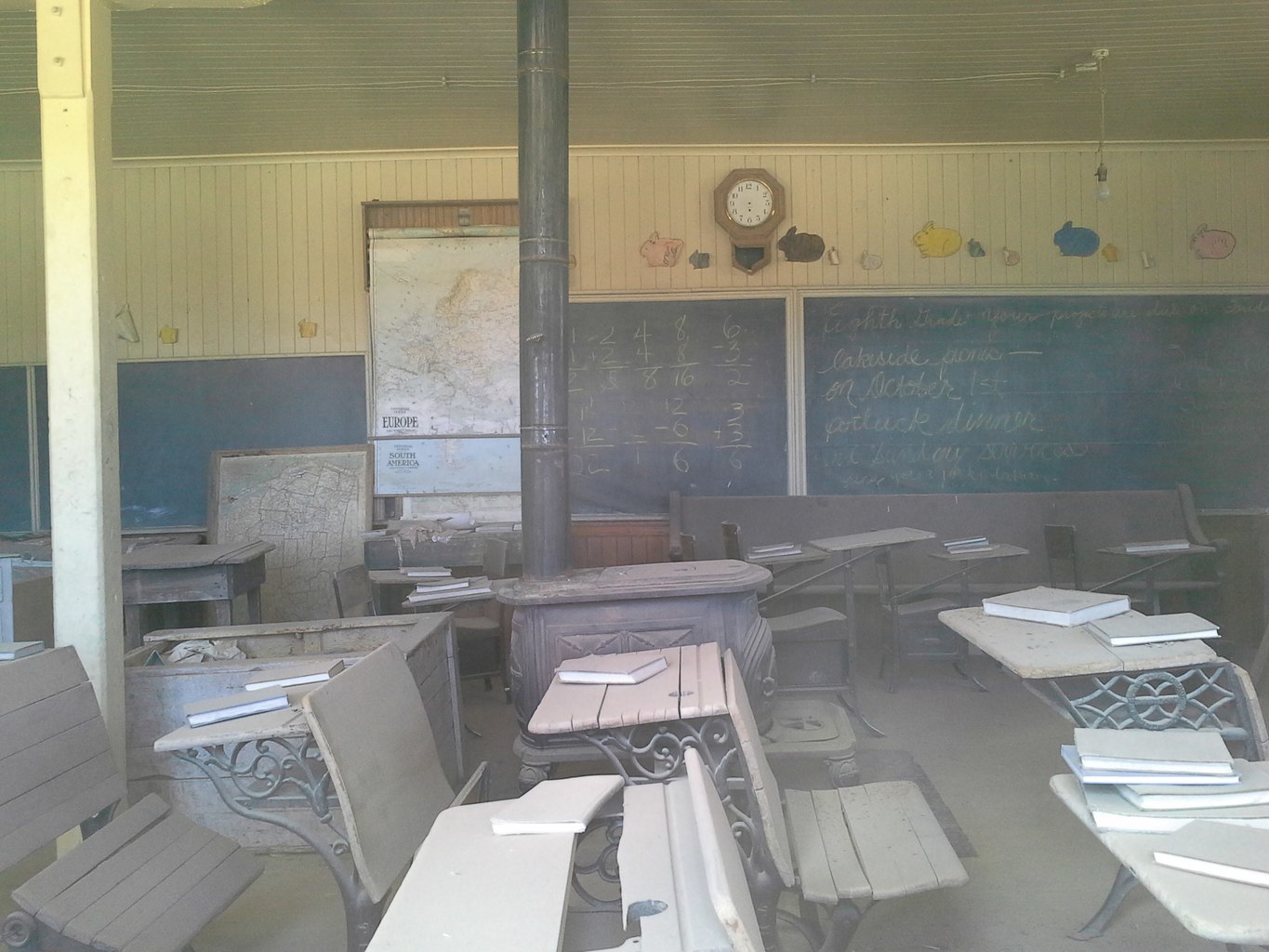 Below is the interior of a saloon.  It looks like the center of the room has been braced up. 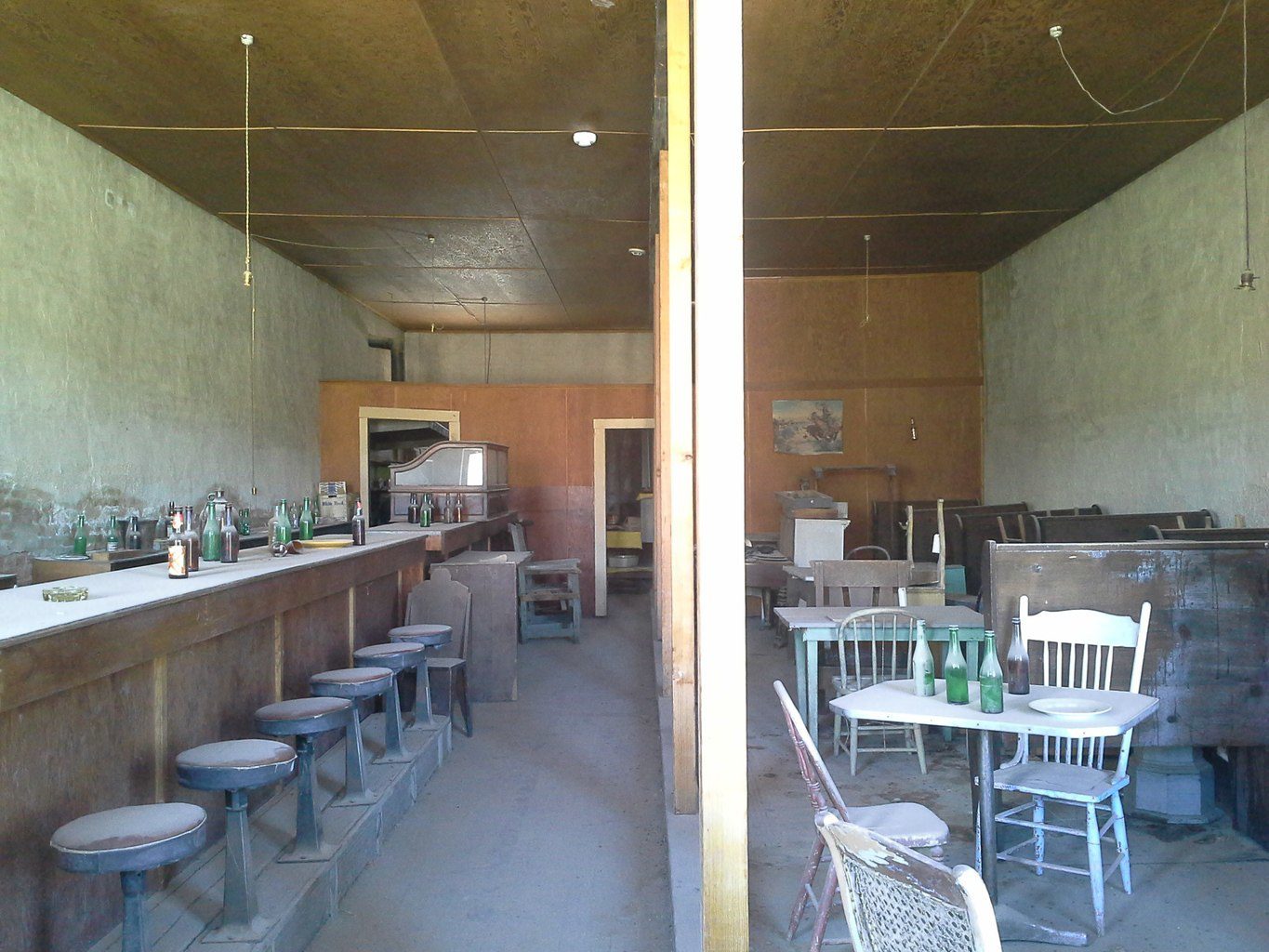 Here’s the interior of another saloon.  Check out how ornate the woodstove is.  Does anyone want to play pool?  Look at the legs of the pool table. How cool is that? 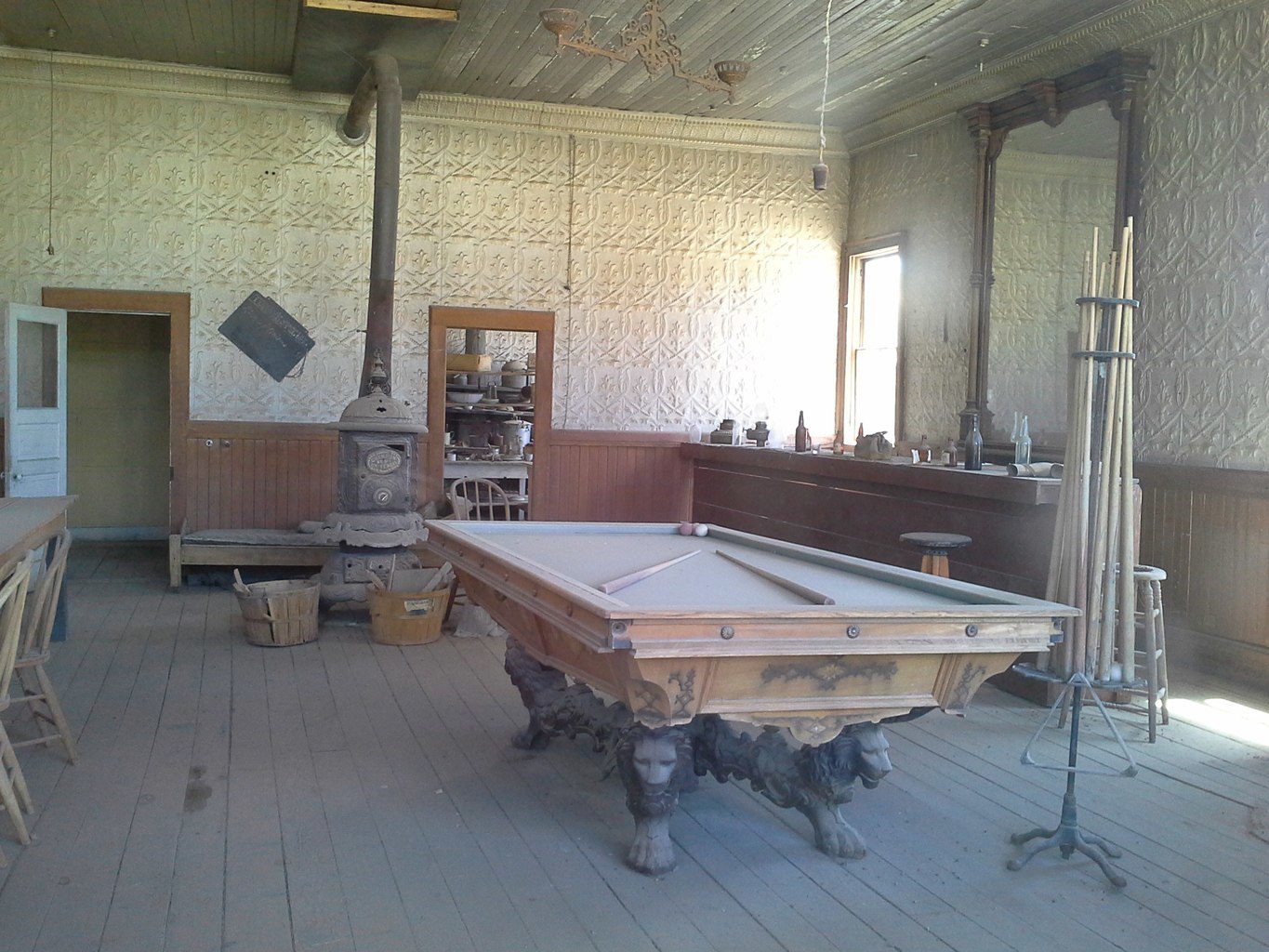 The picture below is the interior of a hotel room at the big hotel. 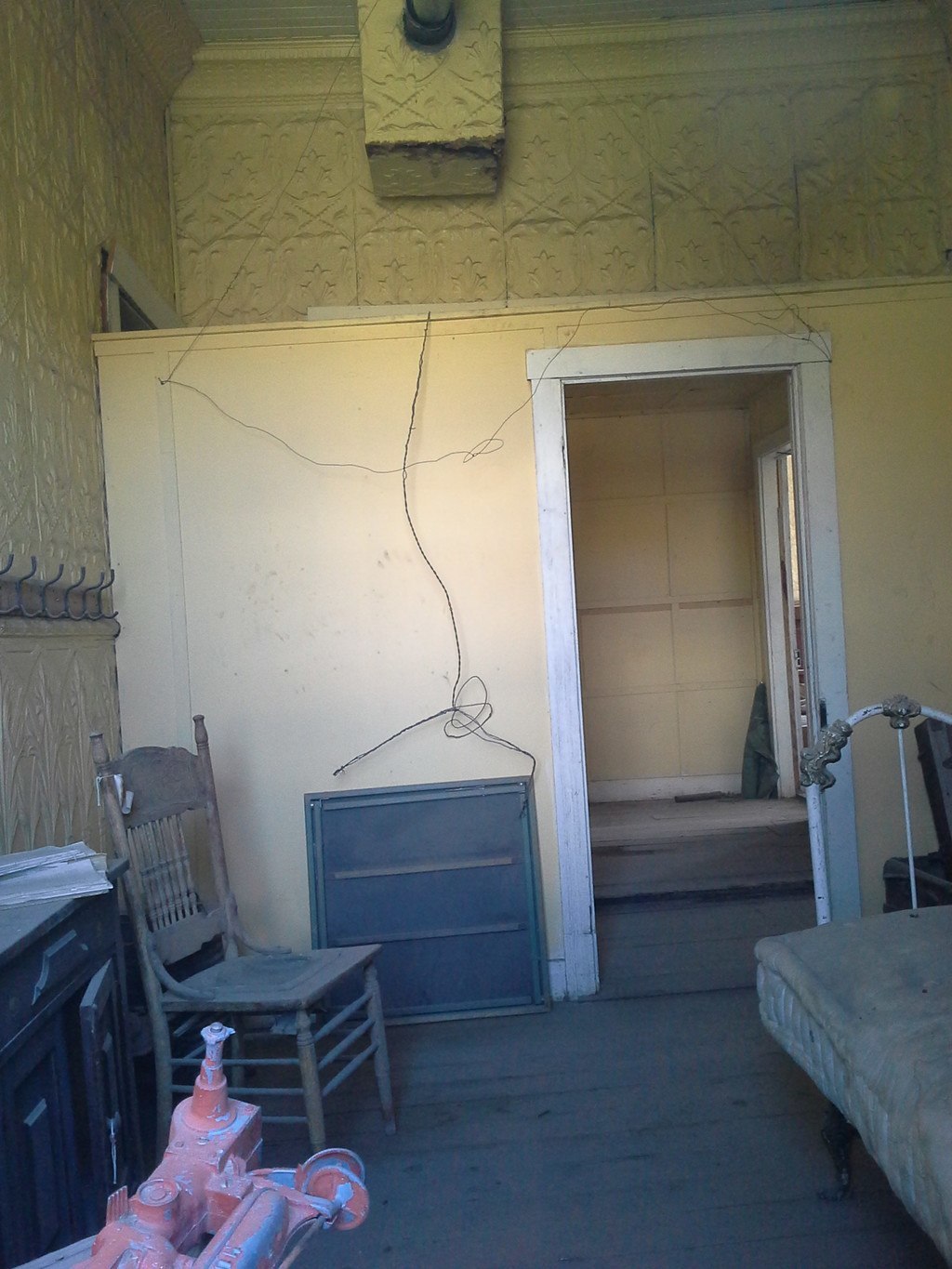 I believe this is the kitchen of the big hotel.  Can you imagine having a refrigerator like that? 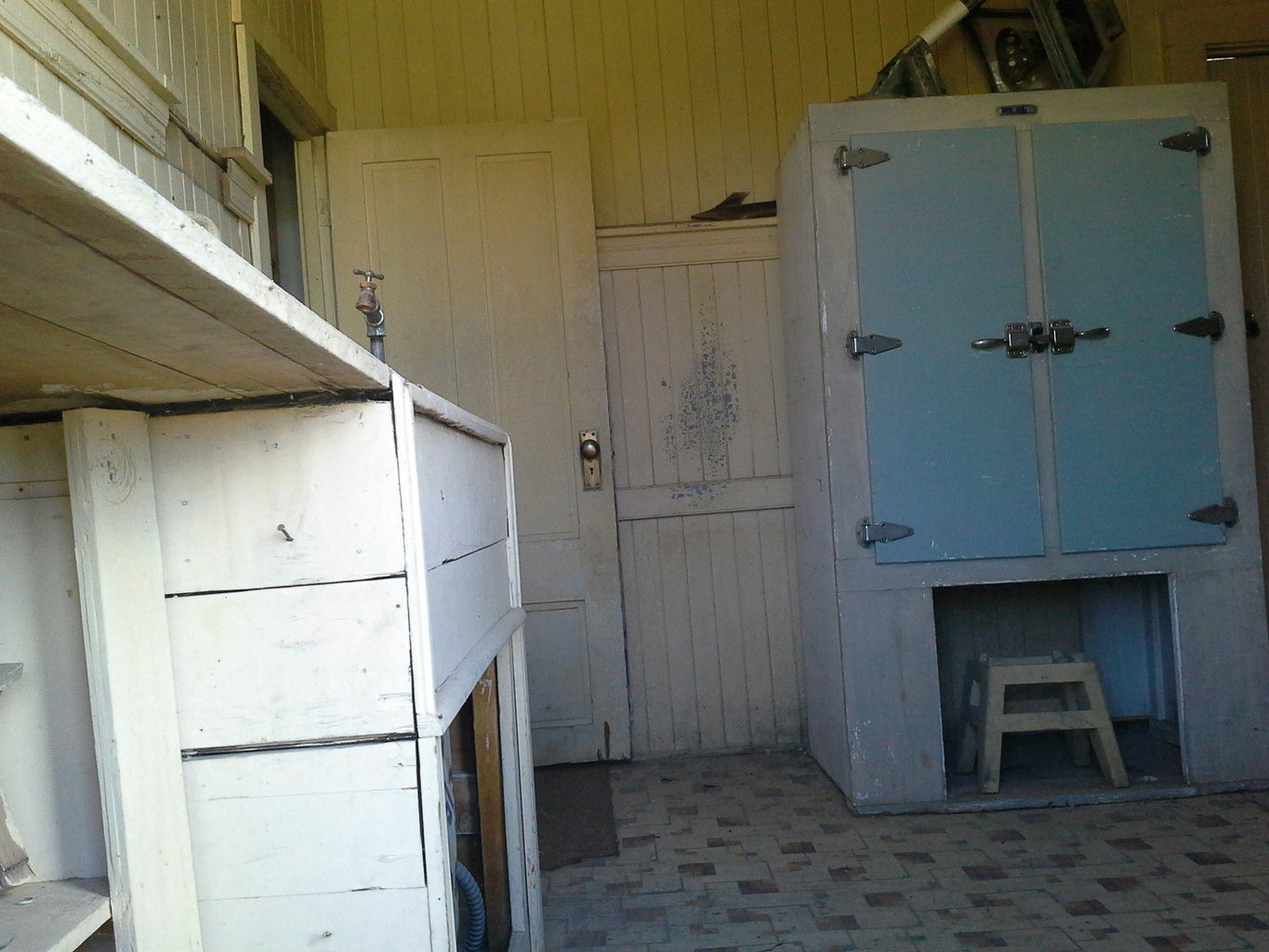 Of course, I had to include at least one picture of the interior of an outhouse.  Note how small the center hole is.  I am guessing the urinal must have been added later? 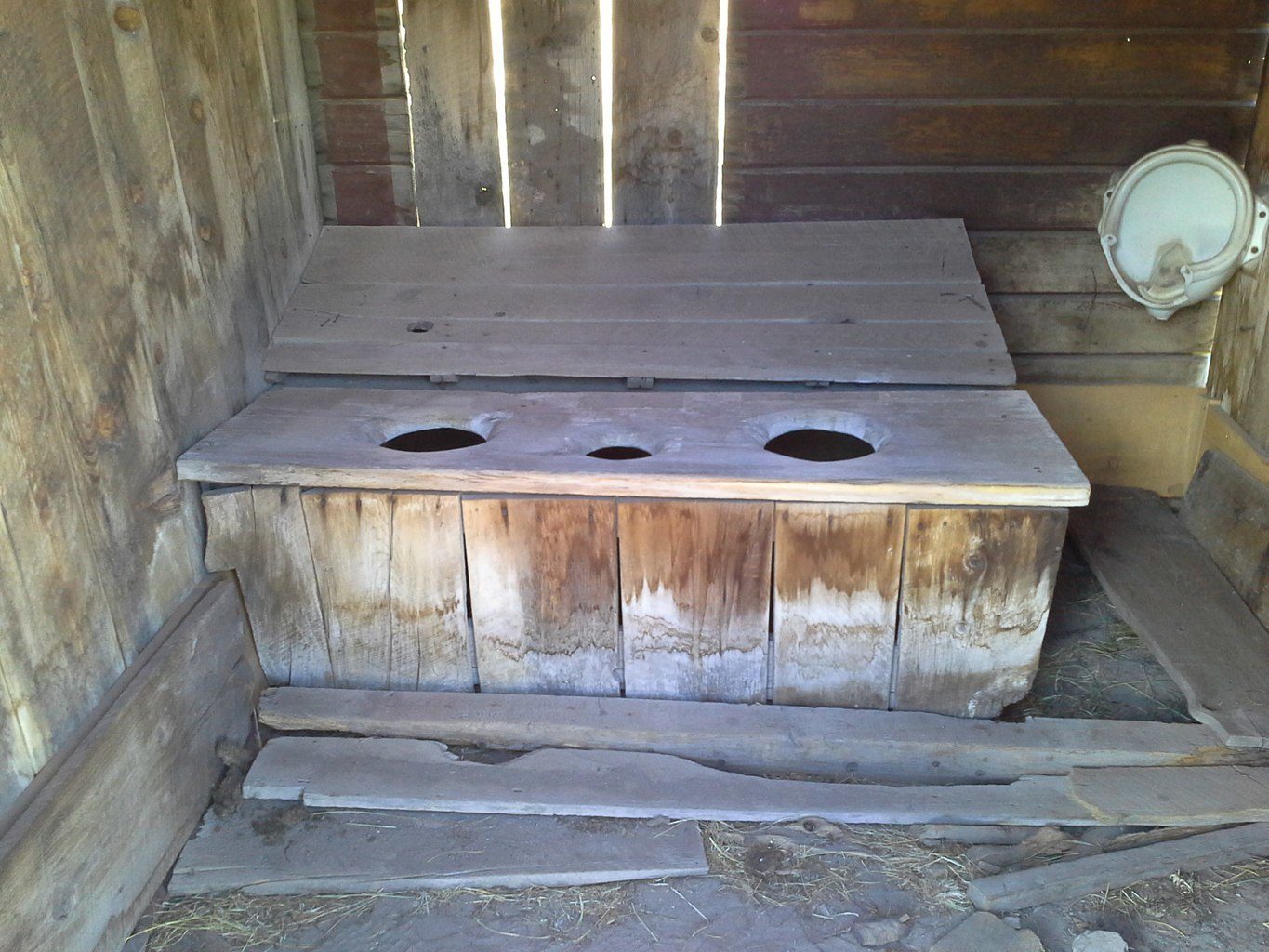 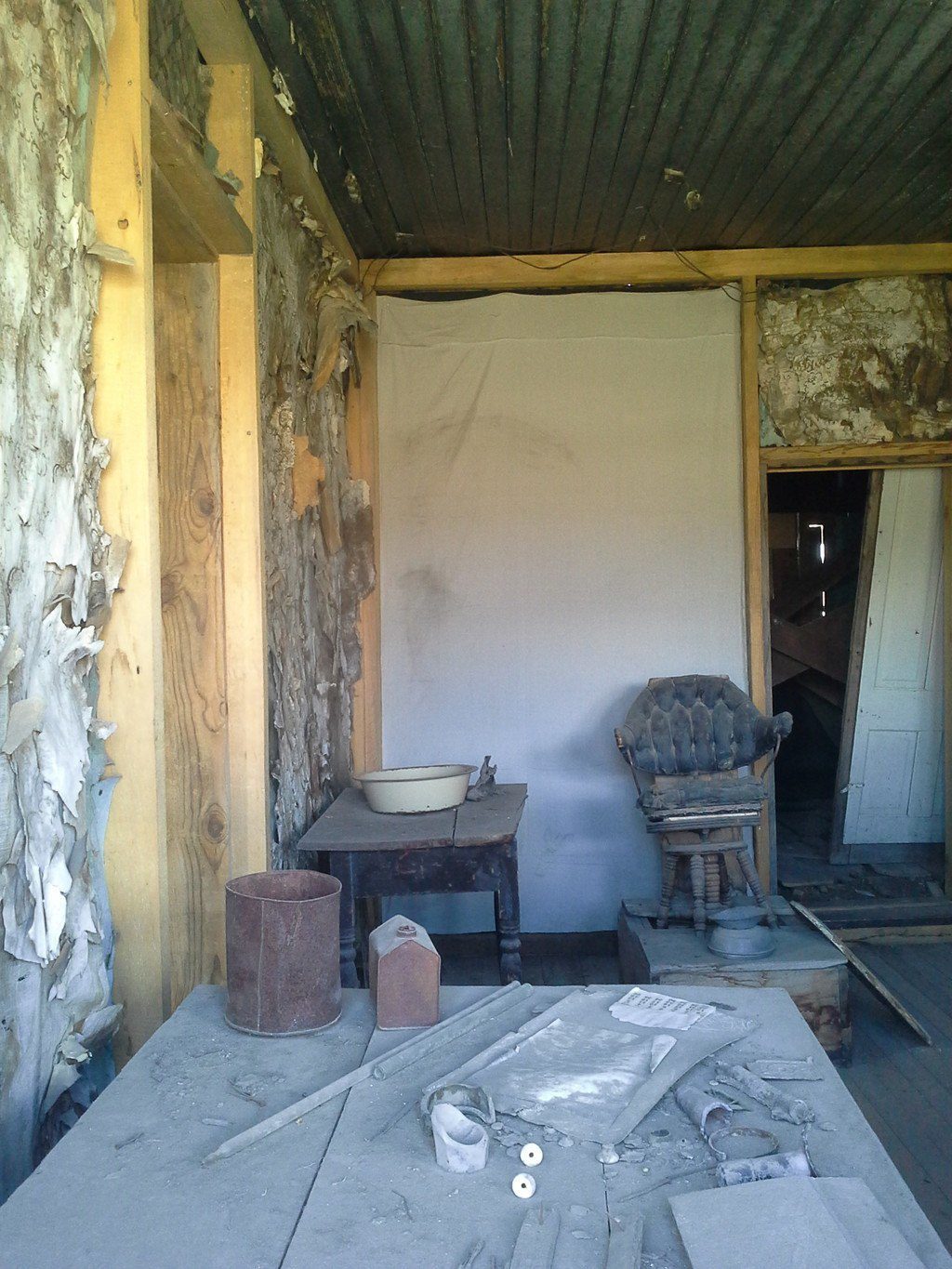 This is the inside of the church. 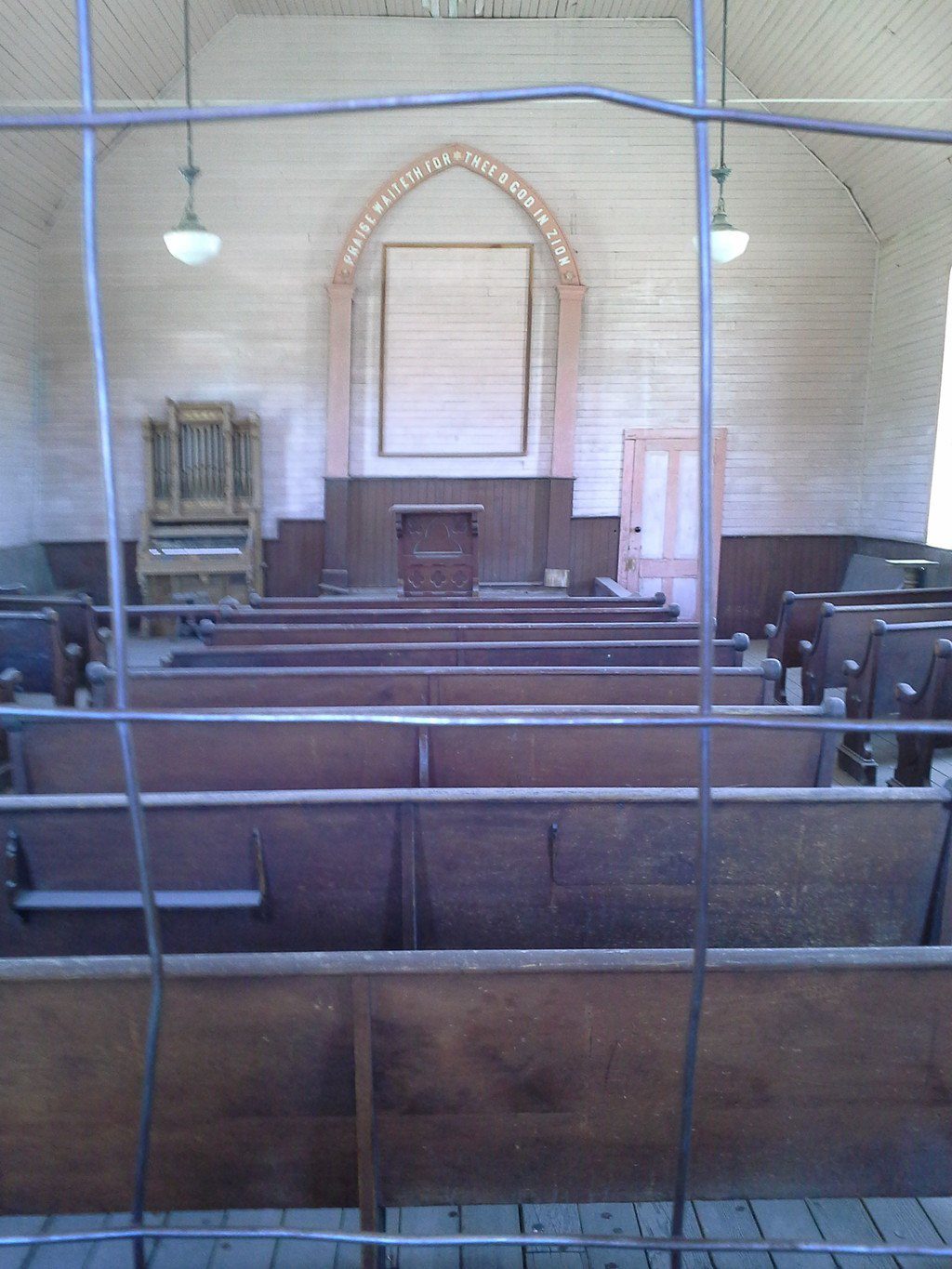 Below is an interior picture of the General Store.  Look at how fantastic the ceiling is.

This is the other side of the General Store. 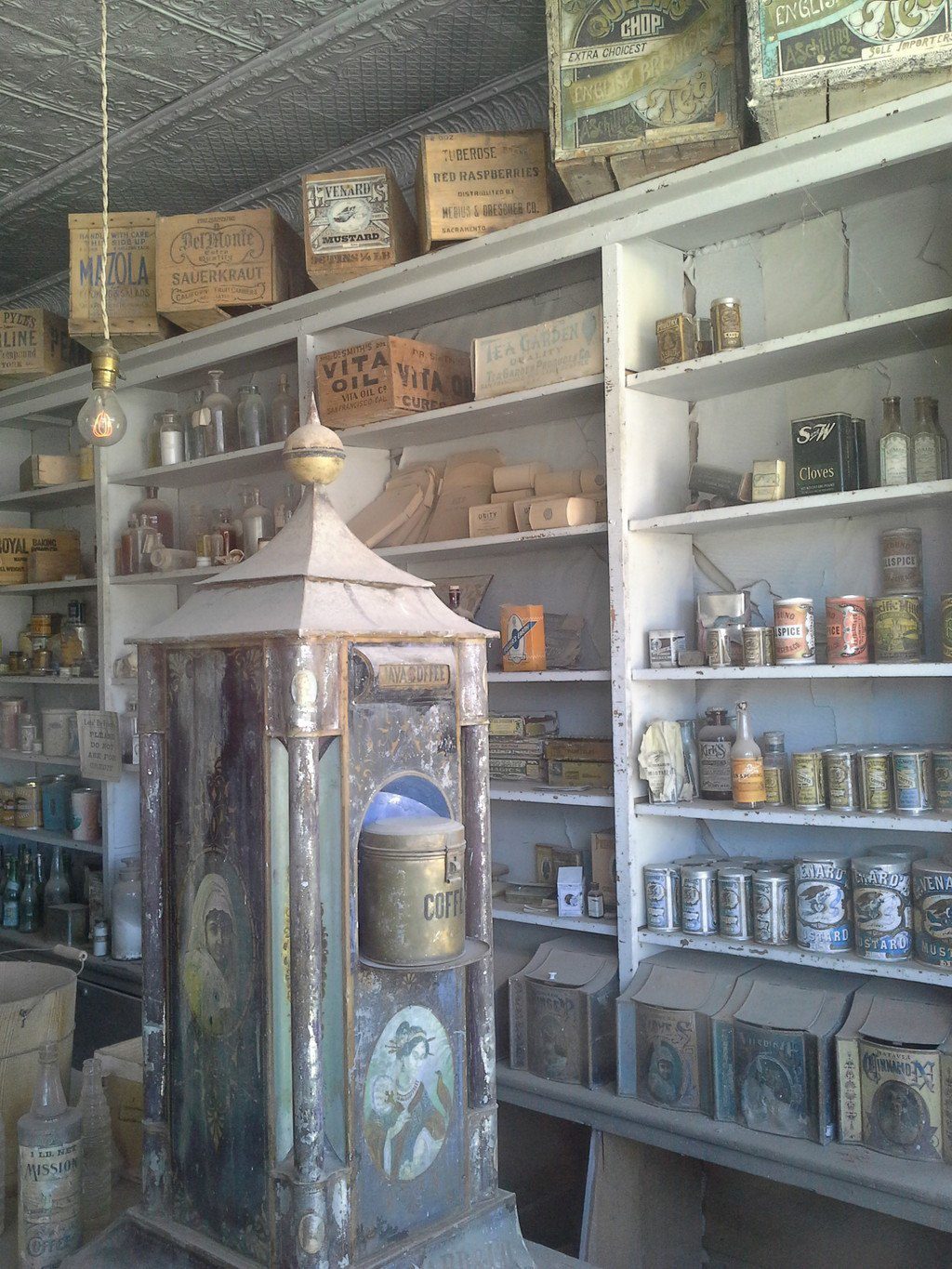 This is the automotive shop, which is attached to the General Store. 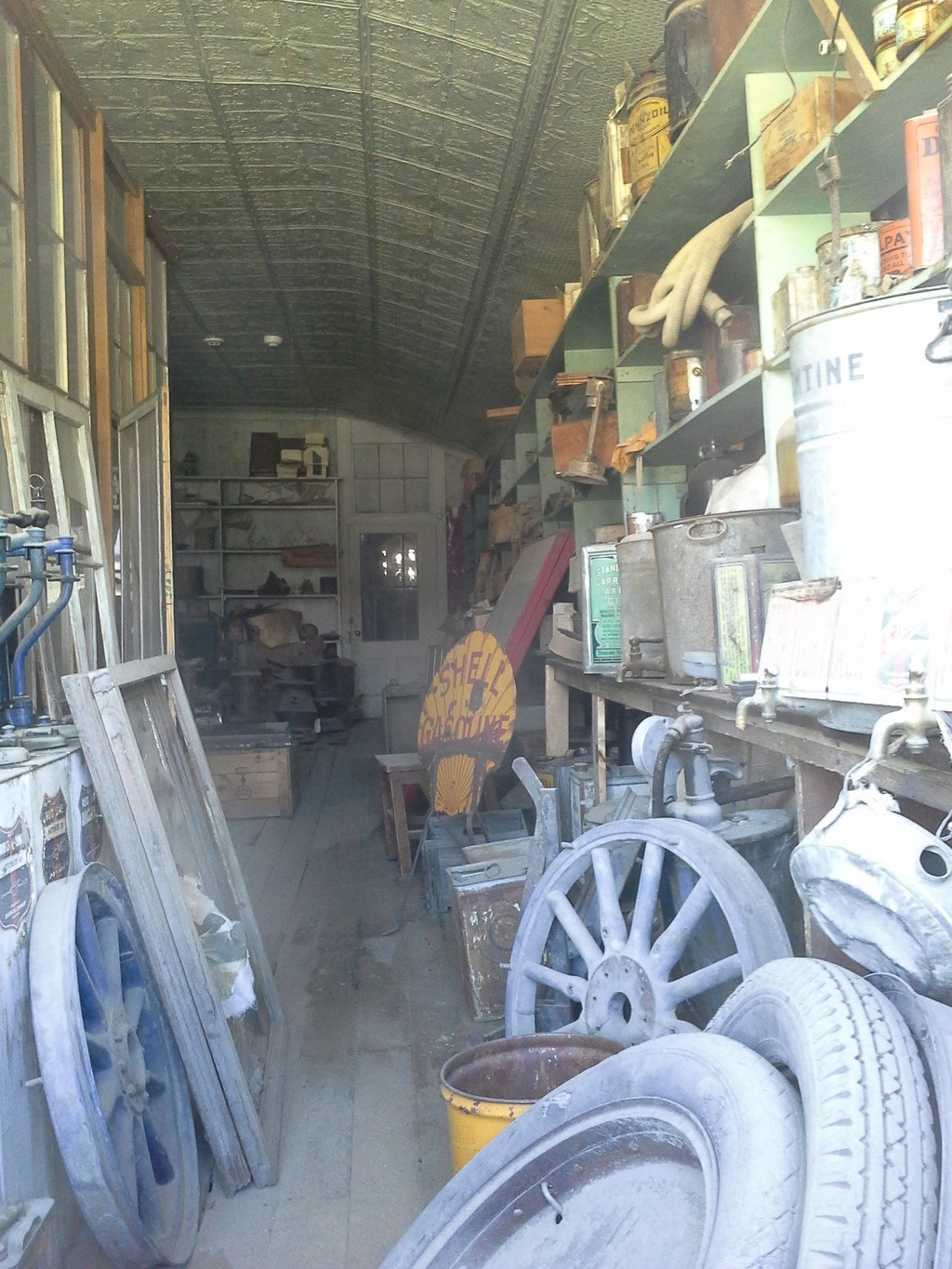 Here’s an interior shot of the mortuary. 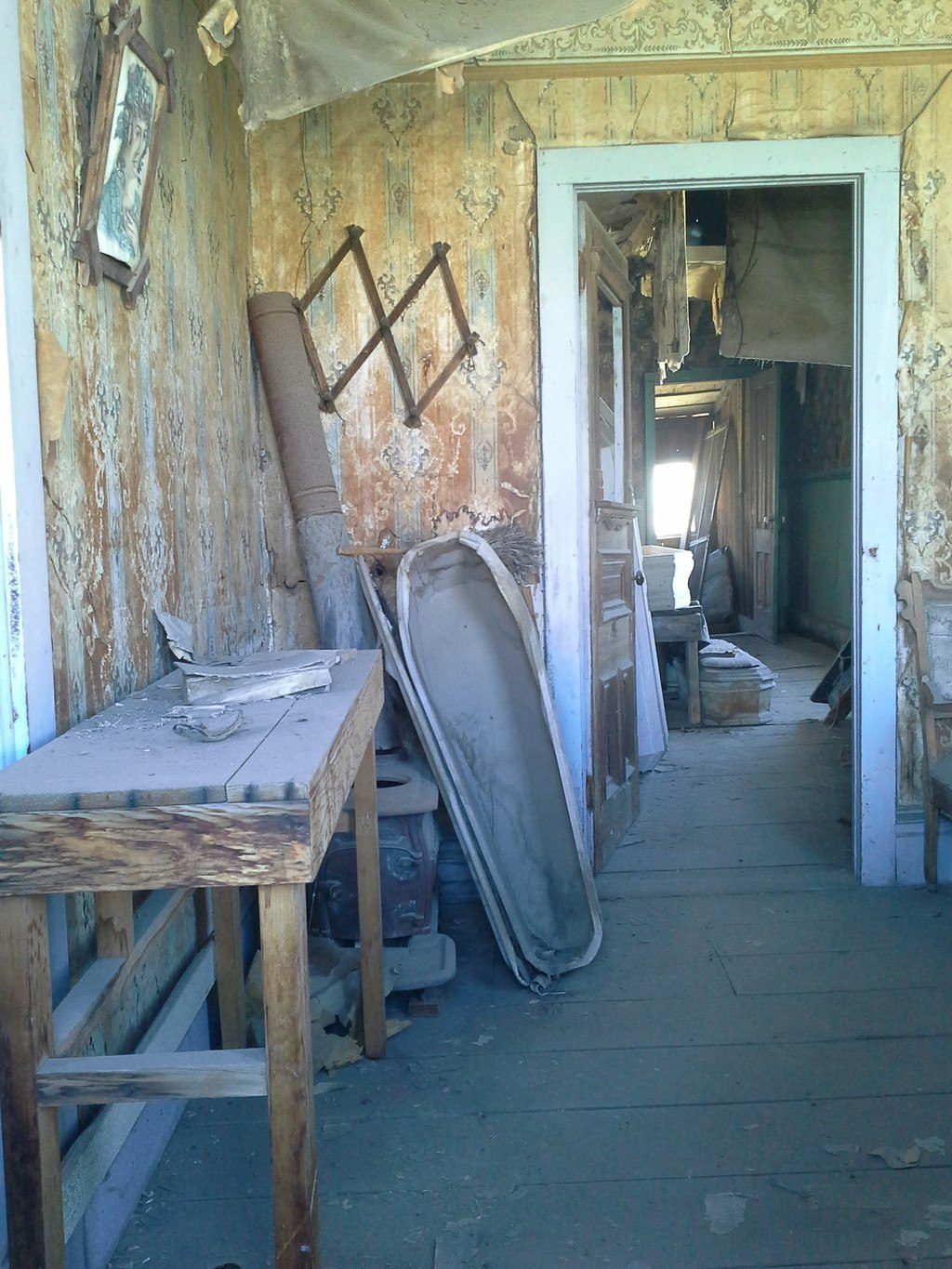 Here’s an old documentary from the 1950s on Bodie California – Bodie Ghost Town.

This post is part of Thursday Doors.  Click the blue-button with the frog on this site to see more doors from around the world.

Never heard of Bodie, but from your description it can't be too far from where I have moved last year. Wow, I can see this was the Gold rush era - pretty ornate things here. Thanks for sharing your visit here!

Jesh, you should totally take the time to go visit Bodie, it's amazing! Thanks for stopping by!

What a fascinating place to visit I'd love to go one day,by the way great photos!

Thanks, Emma! Bodie an amazing unforgettable place and if you are ever in the area, you should visit.

Wonderful pictures! I love it that everything is left just as it was, dust accumulating on it with the years. "Arrested decay" is a great term!

Bodie really is an amazing place and my pictures don't do it justice! Growing up in California my whole life, I had never even heard of Bodie until my husband mentioned he wanted to check it out.