Lakeside Heights is a very small subdivision in Lakeport California, where my mom owns a home.  The sub-development started out as 29 houses but many of the houses have collapsed on themselves or slid down the hill, some houses are condemned and about half the houses are still inhabited.  My mom’s house doesn’t appear to be in danger and she’s currently renting it out.

The homeowners have filed a lawsuit against Lake County and the county is counter-suing the homeowners.

The County says the homeowners watered their lawns too much and washed their cars too often so they are to blame for the slide.  The County also claims the homeowners had a broken pipe, but the community’s shared water is metered and comes with a monthly bill.  There was one big water bill, and it happened after the slide.  As long as I can remember (our doctor’s office is across the street), there has always been water dripping out of the side of the hill, and the county was forever fixing the problem.

Homeowners who have suffered damages have filed homeowners insurance claims which have all been rejected.  Landslides are NOT covered.

Here’s a news video from 2013, about the slide at Lakeside Heights.  The part about the volcano being nearby is ridiculous, there are two towns and many miles between this sub-development and the volcano.

Here are some pictures I took in 2013, when the subdivision was moving rapidly and I’m comparing these 2013 pictures to photos I took last month in March 2016.

This was the first house I remember seeing affected by the slide.  It was a beautiful house with a big beautiful healthy tree in the front yard.  In the background, you can see Clear Lake, which is California’s largest natural lake.  This home was demolished. 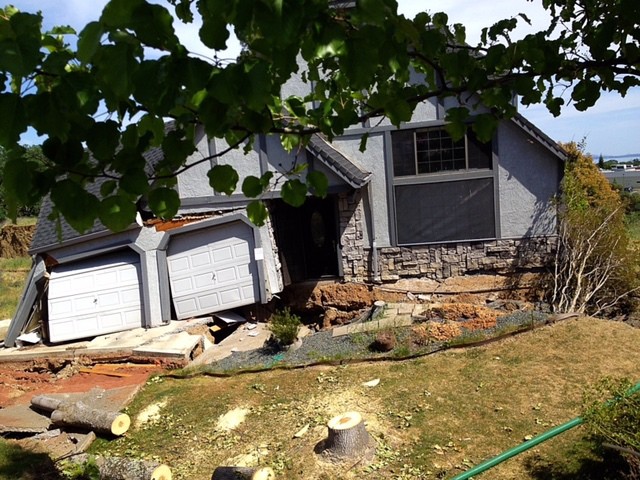 The back deck fell off this house and so did the 1st floor of half the house.  Check out the carpet hanging down.  I believe this is the home you see the interior of on the above news video.  This house was also leveled. 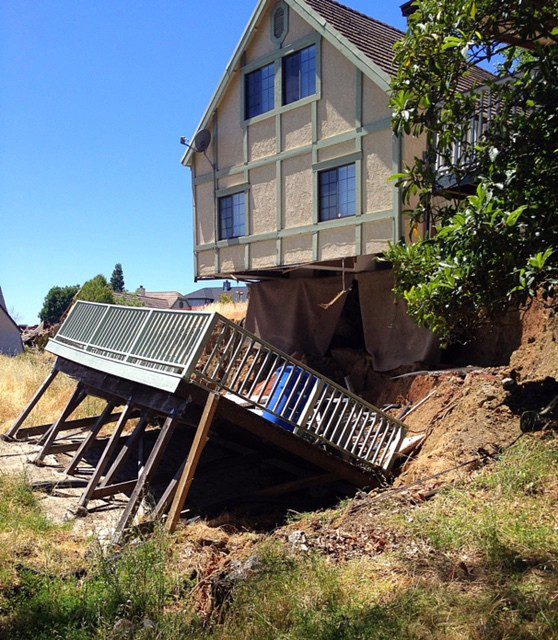 In 2013, the road had been tarped to stop the erosion.

The little-covered shelter in the center of the photo used to be where the Lakeside Height’s mailboxes were located.  This is what this house looked like in 2013.  The home has a detached garage. 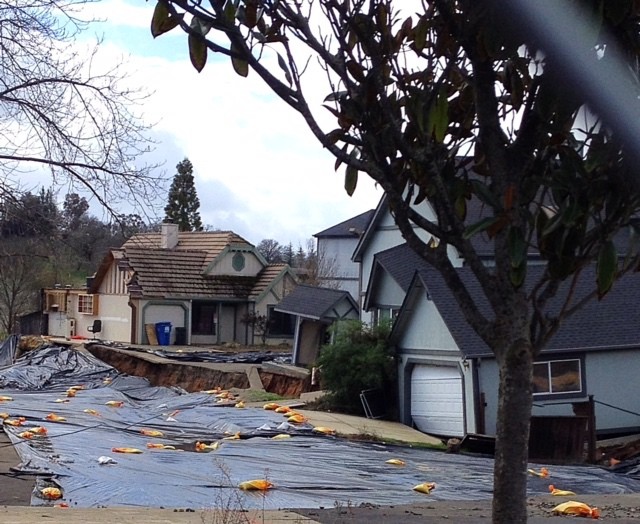 At one time detached garage was about the same level of the house.  This is another photo from 2013. 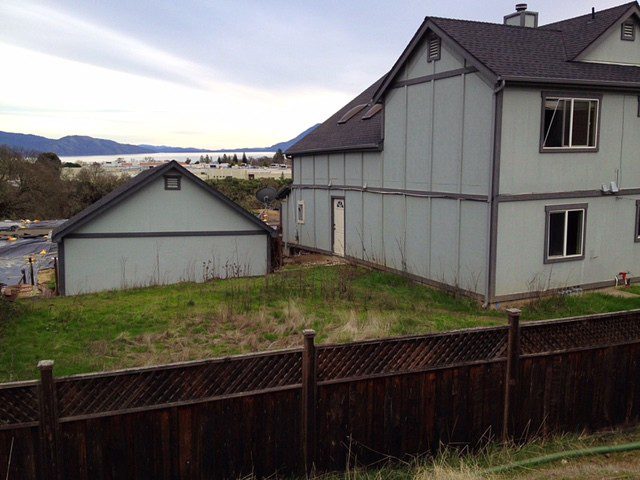 Here’s what house #3 looked like in March 2016.  The house has dropped at least another four feet in three years.  If you compare the photo below and the one above, you’ll see a big difference when you look at the back patio slab.  The house is now detached from its patio slab. 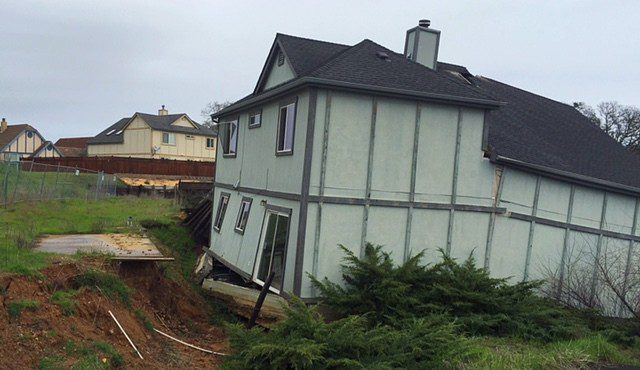 Here’s what the front of house #3 looked like in March 2016.  Notice the house all the way towards the end of the road has now collapsed.  It was still standing in the 2013 photo, although the adjoining house had already collapsed. 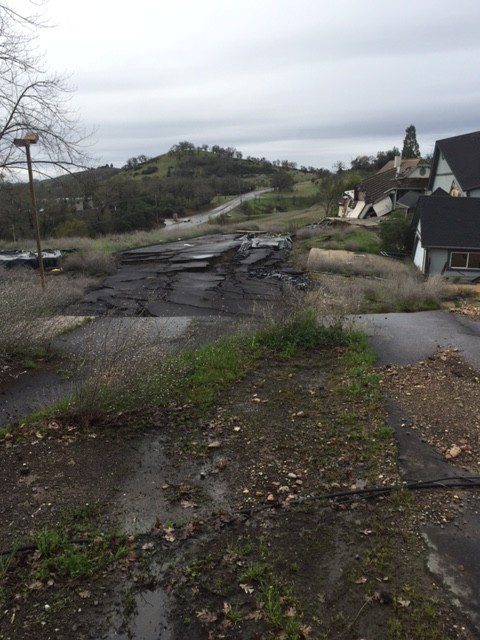 See how the house dropped along with the road?  This is a photo from 2013. 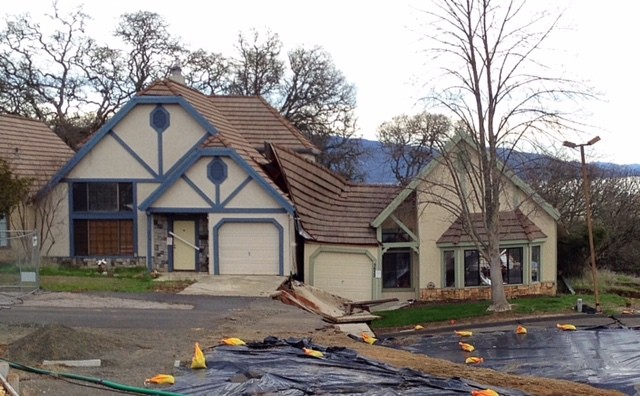 Here’s what House #4 looked like in March 2016, adjoining house #5 has fallen.  Note… you can now see through the blue-trimmed house’s garage?  Lovely. 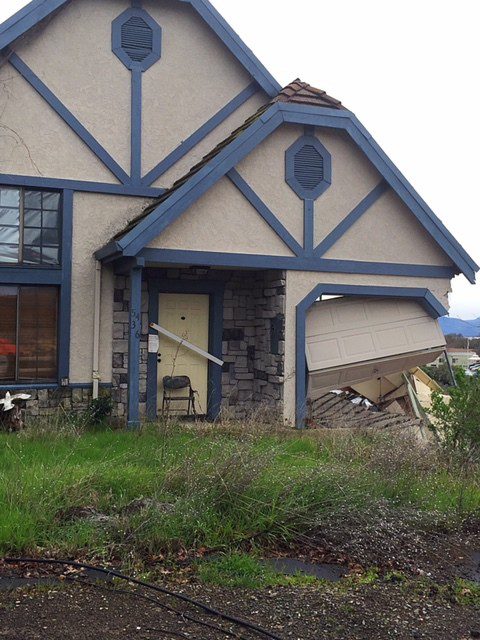 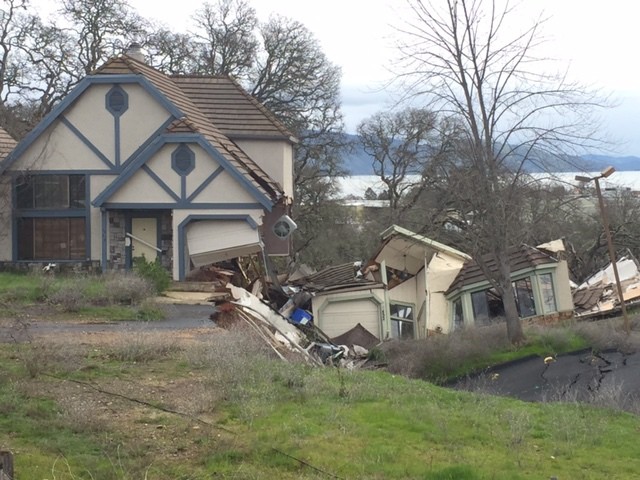 This is currently what the road to Lakeside Heights (left-side) and Sutter Lakeside Hospital (right-side) looks like (April 2016).  The slide has blocked partial access to the hospital.  Only in Lake County would something like this be allowed! 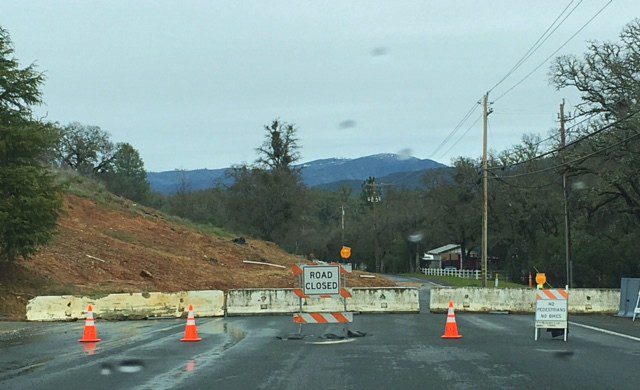 Can you imagine saving money for your house downpayment, then buying your dream house and making all the mortgage payments only to have the house either collapse on itself or slide down the hill? These houses were people’s dream homes, they put blood and sweat equity into making these houses homes to call their own.  As expected the property values in this sub-development are in the toilet.  I wonder how many people have had their credit ruined over this slide?  I know I couldn’t continue to make mortgage payments for a house I couldn’t live in and still manage to pay rent, I could do it for a short time but not the three years it’s been since the slide started.

I am participating in the 2016 A to Z Challenge.  This Lakeside Heights Lakeport California post is my “L” day post.

That;s just heartbreaking, I cannot imagine having to pay a debt for a home that's unfit to live in and so beyond repair.

Thanks for visiting Jean!

I'm thinking most people who had mortgages and house damaged from the landside probably were forced to default on their mortgages. Insurance companies refused to pay so defaulting was probably their only option. It's just a sad situation all around.

My mom's house hasn't been physically damaged by the side... yet. She's lucky (or unlucky depending on how you look at it) her house is paid off, it's too bad her house isn't worth much now.

OMG... Slides are so scary. This is quite a sight. I've never seen such thing.

Arpita this is really scary. Some of the houses that are destroyed now at one time were fine and looked like they were going to be okay.

Can't imagine such a thing happening in the US with its well regulated property market. My sympathies with all homeowners in that development.

I guess this sort of thing can happen anywhere? It is very sad.

Thanks for visiting and commenting!

This is all so very sad and heartbreaking. I worry about similar things happening in the area where I live as the towns and subdivisions keep moving up the nearby hillsides. I also worry about nearby fault lines and potential earthquakes. Who should and can take the blame when such disasters come? Who should cover the costs? It's a very hard question.

You are right Marcy this is very heartbreaking.

Clearly I'm biased since my mom owns a home that's lost most of its value because of this landslide. I personally think the county is to blame for: 1 - Letting the developer build on filled in dirt (on the side of a hill) 2 - Allowing substandard construction. 3 - I didn't touch on this but Lake County's sewer system in the sub development had major issues for years prior to the slide.

Who knows, there could be a natural spring that's sprung up under the sub development? It's up the courts to decide and I'm sure that'll take several more years.

Thank you so much for stopping by and commenting!

It really is heartbreaking! Thanks for visiting Sabine!