Today my son made this cute little Kirby from modeling clay.  Isn’t it cute?  The little Kirby is lighter colored and is pinker in person. 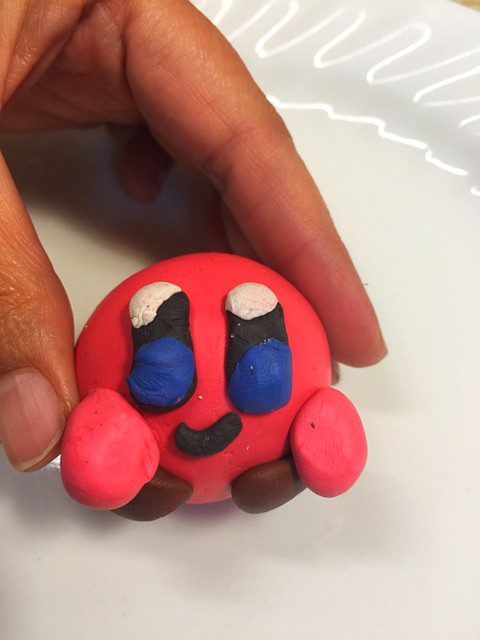 Kirby is a Nintendo video game character that was created for the Nintendo GameBoy.  There are a several wildly popular Kirby video games and Kirby makes an appearance in Super Smash Brothers.

June 10, 2016, Nintendo will be releasing a new Kirby game for Nintendo’s 3DS called Kirby:  Planet Robobot.  If you pre-order the game from Amazon, it will arrive at your house on the same day the game is released.

I am participating in the 2016 A to Z Challenge.  This Kirby Made From Modeling Clay is my “K” day post.

I'm kindof out of touch with the game world now that the kids are grown and gone. Thanks for teaching me all about Kirby!

Marcy, I still have kids and I'm out of touch with the gaming world. There's such a huge selection, I really can't keep up.

Thanks for stopping by and visiting again.

That is too cute :) You son did a great job.

Aw, that is cute. He did a great job, and after a game character no less. Bravo. Happy A to Z.

Hello fellow contender in the A-Z Blogging Challenge. I just wanted to drop by to thank you for checking out my blog earlier and in tribute to you, I’ve tagged you in my post for today. Kowtow to the Knightwriter. Kirby is so cute...I sewed a Kirby once. Feel free to check it out! Cheers and best wishes through the rest of the challenge.

Thanks for tagging me Crackerberries! I appreciate your visiting and commenting too.